GMO Answers on the IARC Assessment of 2,4-D as a Possible Carcinogen

June 25, 2015
The International Agency for Research on Cancer (IARC) creates Working Groups to periodically consider lifestyles, workplaces, and compounds that may have carcinogenicity potential. IARC is an agency under the World Health Organization (WHO) but is not responsible for regulating pesticides. On Monday, IARC classified 2,4-D as "possibly carcinogenic" to humans (Group 2B — same category as coffee and carpentry). Will this classification affect your daily life? Most likely — no.

What is 2,4-D?
2,4-D is a commonly used herbicide that is approved for use by government regulatory agencies in over 90 countries. 2,4-D is both the world's most studied herbicide and the world's most researched chemical in history — over 4,000 studies have been conducted in the past 60 years. Read more about 2,4-D as an agricultural herbicide in this overview previously posted to GMO Answers.

It plays an important role in protecting crops, improving agricultural yields, reducing the risk of invasive and noxious species, protecting wildlife habitats, and protecting infrastructure. While improving food production and reducing food costs are what 2,4-D is best known for, there are also environmental benefits that include decreased soil erosion and decreased greenhouse gases through reduced soil tillage.

How does 2,4-D work?
According to The National Pesticide Information Center, "2,4-D kills broadleaf weeds but not most grasses. 2,4-D kills plants by causing the cells in the tissues that carry water and nutrients to divide and grow without stopping. Herbicides that act this way are called auxin-type herbicides." Want to learn more about how 2,4-D works? You can visit The National Pesticide Information Center for a comprehensive 2,4-D fact sheet.

So what does IARC’s classification of 2,4-D mean?
The IARC Working Group does not conduct any new research, but rather reviews a selection of studies previously reviewed by health and safety regulators, then scores the compounds. Essentially, IARC's classification of 2,4-D as a “possible carcinogen” means that, just like coffee, aloe vera, and even carpentry, 2,4-D has been found by IARC to have the potential to cause cancer. Does that mean it will cause cancer? Not necessarily. The Monographs Programme may identify cancer hazards even when risks are very low with known patterns of use or exposure. 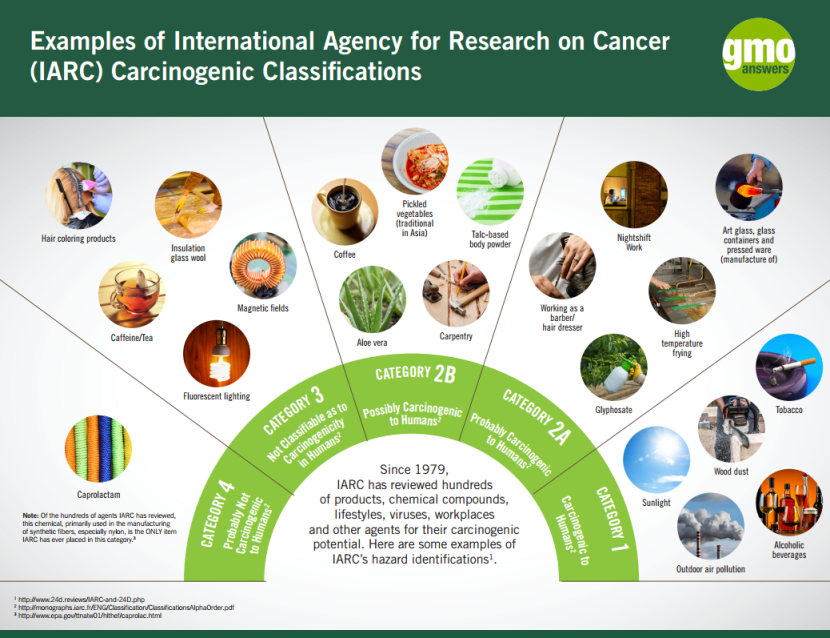 The [IARC] lists themselves say nothing about how likely it is that an agent will cause cancer. Carcinogens do not cause cancer at all times, under all circumstances. Some may only be carcinogenic if a person is exposed in a certain way (for example, swallowing it as opposed to touching it). Some may only cause cancer in people who have a certain genetic makeup. Some of these agents may lead to cancer after only a very small exposure, while others might require intense exposure over many years.

GMO Answers independent expert James Bus, Ph.D., DABT, Fellow ATS wrote a great response to the IARC’s classification of 2,4-D as a “possible carcinogen”. A small blurb is below but we encourage you to read his piece in its entirety.

In his post, IARC Cancer Classification at Odds with Health and Safety Regulators Worldwide, Dr. Bus states the there has been more than seven decades of ongoing and continuous research on 2,4‑D. In fact he argues that “it is the world’s most studied chemical, totaling more than 40,000 studies and allowing it to be used in over 90 countries with more than 100 label uses.”

He goes on to say that in considering animal studies conducted at doses thousands of times higher than actual 2,4-D exposure, IARC concluded there was “limited evidence of carcinogenicity” in animals. In voting, the IARC Working Group classified the potential hazard as a 2B – “possible” human carcinogen. Other substances in this group include aloe vera, coffee, and pickled vegetables.

Exposure and dosage are critical when determining if a substance is a human carcinogen. For example, IARC acknowledges that if exposure were factored into the equation, a different result could be reached. Aaron Blair, a previous IARC Panel Chair explained:

“We look at ‘could it potentially’ cause cancer, but we don’t look at whether it ‘will or is likely to’ cause cancer in real world use.”

Fortunately, the US EPA does consider real world use. In considering the same data last year after a much longer review than IARC’s seven day glimpse at the data, it determined: “…[B]ased on weight of evidence consideration of the available data, 2,4-D would be classified as ‘Not Likely to be Carcinogenic to Humans’.”

Dr. James Bus is a Senior Managing Scientist at Exponent Engineering and Scientific Consulting. He has over 35 years of toxicology experience focused on research and evidence-based literature analyses informing potential health risks associated with chemical and pesticide exposures. Dr. Bus has served as President of the Society of Toxicology, the American Board of Toxicology, and the Academy of Toxicological Sciences, and as a Director of the International Union of Toxicology.