GMO Answers Provides an Overview of GMOs in Medicine

September 24, 2014
With genetically engineered therapies for the infectious disease, Ebola, currently undergoing testing for safety and efficacy, GMO Answers is highlighting the use of genetic engineering in other biomedical applications. The post’s author, Richard Green, also looks at why GMOs, though used in both agriculture and medicine, are more controversial in agricultural applications.

The technology has been around for 40 years. It is hardly new. Perhaps if you compare it to the internal combustion engine it is new, but compared to something as recent and ubiquitous as flat screen HDTVs, DVRs, and Wi-Fi-friendly touch screen devices like iPhones and Tablets, it is a time tested technology. 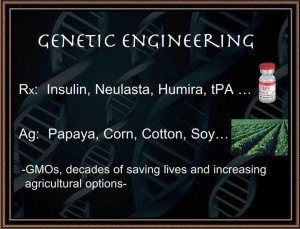 In medicine, genetic engineering (GE) is used to make biopharmaceutical drugs. Various organisms are engineered for use as factories to produce the drug product. Bacteria are the preferred option, as they are the easiest to grow and scale-up for production, but depending on the complexity of the drug’s molecular structure, other organisms such as yeasts, mammalian cells, etc., can also be used to express the drug product. The first GE drug approved for use was insulin. By the year 2000, there were over 100 GE drugs on the market. Currently, people’s lives are changed every day by drugs like Remicade, Epo, Avastin, and Neulasta…

While genetic engineering is used in both agriculture and medicine, it is far more controversial in agriculture. Here is an explanation that helped shape my point of view: intellectually, I can grasp that adding or silencing a few well-characterized genes out of thousands is a drop in the genome bucket, but for me it makes it a bit more real to think of it in terms of people. Just look at the variety among us. Variations between our thousands of genes are why we are all different from each other, but even with those differences, we are all human. It is similar with plants. Changing one, or as we get better, a few genes, in the plant genome is barely a blip compared to the normal diversity between individuals. To paraphrase what a wise man once said, GE corn is just corn.

We encourage you to visit our GMO Answers site and read GMOs in Food and Medicine: An Overview in its entirety.
More on This Topic