The Good, the Bad, and the Ugly for Biotech IPOs

November 14, 2012
The troubles in the biotech IPO market are complicated to explain to industry outsiders. They read about new biotechs debuting on the public market, but also hear bankers, VCs, and CEOs complaining about how the IPO window never really opened after 2008. The reality is that we are seeing positive developments and negative trends simultaneously.

On the bright side, the cumulative number of IPOs is holding up. The recent pace of biotech IPOs mimics what the industry saw after the dot.com crash, with the industry logging one IPO per month on average for the first three years. There is a near perfect overlay between the cumulative number of IPOs in the recent 2009-2012 IPO window and the number seen in 2003-2007 (see chart below). Back in October 2006, three years into the window, the US had 43 total IPOs. This is uncannily close to the 45 we have today, also three years into the new window. 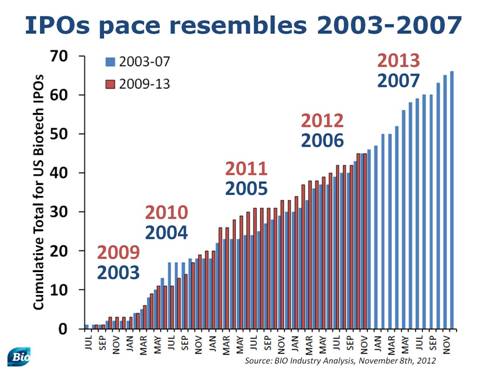 If this pattern holds, 2013 could be a banner year for biotech IPOs. In the 4th year of the previous IPO window (2007), IPO frequency jumped to over 1.6 per month. That would put 2013 on pace for 20 biotech IPOs. Since BIO Industry Analysis first presented  this overlay back in October 2010, we have been amazed at how the charts match up month to month. Given the new Jobs Act rules for pre-IPO marketing and SEC compliance, the 20 private biotechs that have already filed to go public, and the momentum in the broader biotech index, 2013 could live up to this projection.

Also in 2012, we are seeing positive gains for the most recent IPOs. Since the Cumberland IPO in August 2009, we have seen 34 therapeutic and 5 diagnostic companies make it to the market. In the chart below, we plot the average Year-to-Date performance of each IPO “class” from 2009-2012. (Note that the six industrial biotech IPOs are not included for this analysis. Also one therapeutic IPO has been acquired (Talecris, TCLR, class of 2009), as well as one diagnostic IPO (Complete Genomics, GNOM, class of 2010). 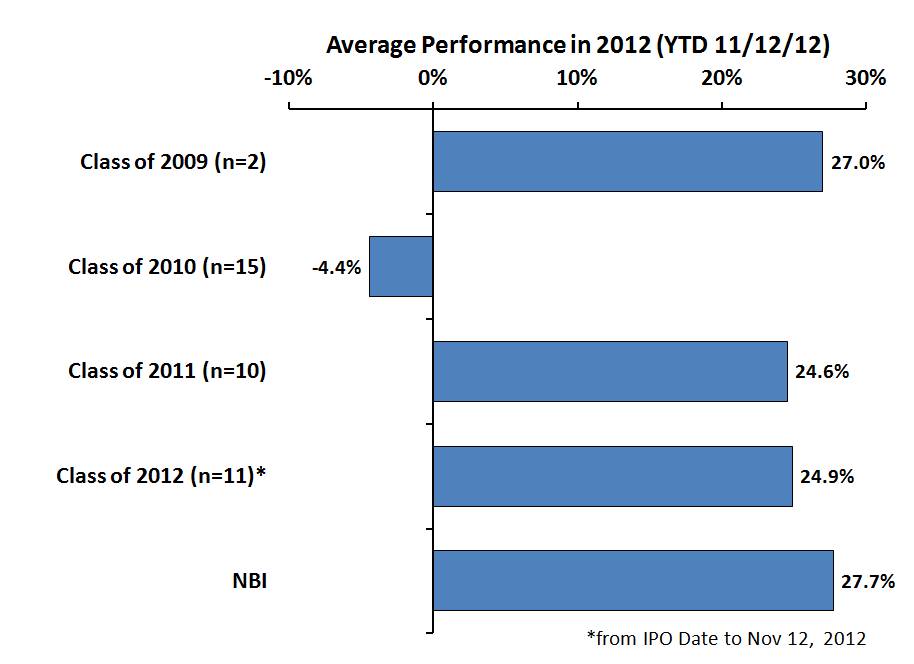 For most of the companies, 2012 has been a great year. The Nasdaq Biotech Index (NBI) is up three times that of the S&P 500, and a number of IPO stocks have joined the boom in biotech.  Coming in close to the big NBI returns are averages for the IPO classes of 2009, 2011, and 2012. Only the class of 2010 has turned in a negative average performance this year.

However, almost all companies are still having a difficult time raising funds at prices they file for initially (see table below). The median amount raised is 27% below the amount sought in the original S-1 filings for the current 2009-2012 IPOs. The new 2012 class seems to be doing better, but is still pricing 20% under the original target. Here is a breakdown, by class, of amounts raised and the percentage over/under from the target amount in the original S-1:

When taking the broader biotech market performance into context, the price performance for the IPO stocks of 2009-2011 starts to look ugly. As seen in the table below, these IPOs underperformed the Nasdaq Biotech Index (NBI) by 58%, 88%, and 32%, respectively. In other words, if investors had put their money in a biotech index on the same date of each IPO, on average the index would have prevailed by a wide margin. 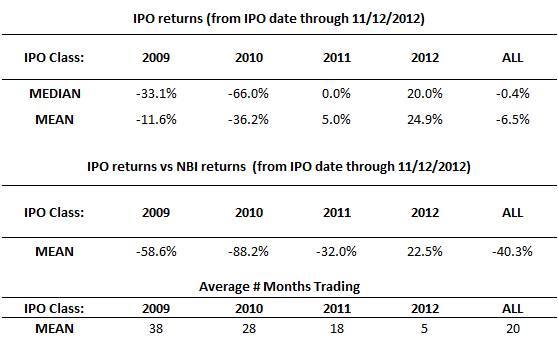 The table above reports both median and mean performance, for each class, from IPO date through November 2nd, 2012. Also included is the under/over performance vs. the NBI from the IPO date.

Timing is everything. The IPOs in 2012 are beating the NBI in part due to the dates of the IPOs. Had they all entered the market in early January, they would have had a tougher time beating the 27% rise of the NBI, which shot up at the start of the year.  However, six of the IPOs this year took place in June, July and October and the NBI has corrected from its October 5th peak of 1548. This has generated a 22% average outperformance for the 2012 class. A standout example of outperformance this year has been Supernus (SUPN), which is up 146% since the 5/2/2012 IPO vs. the NBI up only 5% in that time frame.

Taking a step back and looking at the healthcare IPO market vs. other industries, it seems healthcare has been out of favor based on the volume of IPO exits. Renaissance Capital tracks the numbers for 11 industries. As shown in the chart below using their data for healthcare, it seems that 1) as percentage of all IPOs healthcare has been in a downtrend for years and is 2) clearly out of favor relative to technology offerings (not a surprise to any VC, but interesting to see the size of the delta in the chart). 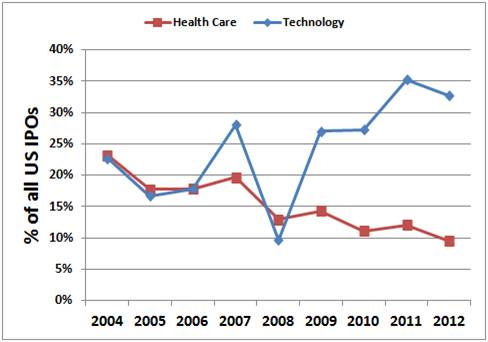 Hopefully, Wall Street in 2013 will warm up to the healthcare IPO, and biotechs will lead the way. The signs of life on the IPOs stage that we are seeing in 2012 (the first two pre-clinical IPOs in years (VSTM, RGLS), and the market outperformance) could be a foundation for a great year. This will certainly be in the panel discussion spotlight at BIO's next investor event, the BIO CEO Conference next February. (Registration begins today and can be found here)

Fig 6. List of therapeutic and diagnostic IPOs since 2008: (source: BIO)