Haves and Have Nots in Biotech Venture Capital 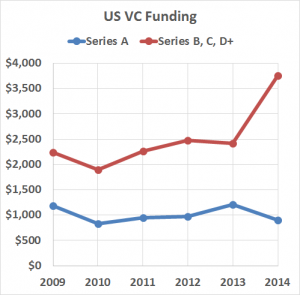 The first finding from the recent study is that funding of therapeutic companies is strong for late rounds (Series B and above), but weak for Series A. Although total levels of venture funding have been climbing recently, the majority of the increase is from late rounds. A large part of this is likely due to a pick-up in crossover activity from public investment funds that add to late-stage venture rounds. In 2014, the differential was at extreme levels, with Series A funding going down from the prior year while later stage funding experienced a sharp increase.

The question this poses is “How dependent on crossover funds is the recent boom in venture financing, and what happens if crossover funds decide to go back to public markets?” 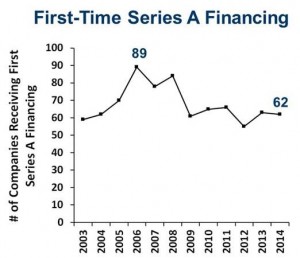 Another twist to the return of venture capital story is that there has been no growth in new company formation. In fact, 2014 levels are down significantly from their peak in 2006. Below is a chart of first-time Series A financings, one way to assess formation of companies with enough capital for IND enabling or Phase I/II studies. Here we see a drop from 89 companies formed in 2006 to only 62 in 2014.

The question this poses is this: Is 60-65 new companies per year enough to maintain a diverse ecosystem? Certainly there are many more entrepreneurs seeking this level of funding, but the pool of venture funds backing Series A rounds has shrunk over the last decade. 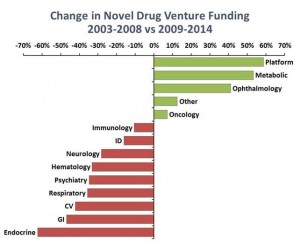 The final case of “haves and have-nots” can be found when comparing specific disease areas. Investment is picking up in rare diseases and oncology, but is decreasing for chronic diseases. The chart below compares novel drug R&D funding by disease comparing the two prior six-year windows, 2003-2008 vs. 2009-2014. The most notable decreases are found in Endocrine, Cardiovascular, Psychiatry, Gastrointestinal, Respiratory, and Neurology.

The declines shown above have impacted many entrepreneurs across the industry seeking additional funding for diseases affecting large populations. What will it take for prior levels of venture funding to return for companies focused on chronic diseases?

More on the data: To investigate investor trends in specific therapeutic areas and level of innovation, we analyzed and combined data from four venture capital databases (Thomson Reuters, Biocentury, Informa Strategic Transactions Database, EvalutePharma) to create the broadest, most comprehensive study possible – a categorization of venture capital into more than 1,200 U.S. drug companies, receiving more than 2,000 rounds of funding over the last 12 years. Individual tranches within each investment round were categorized by lead program at the time funding was received as to phase of development, disease and indication, modality, and, most uniquely, level of novelty. To assess level of novelty, we grouped companies into two categories:

A copy of the most recent report on emerging company financial and deal activity can be found on Bio.org.
More on This Topic