October 27, 2016
Just as flu season gears up, Health Affairs released a new study, “Modeling The Economic Burden Of Adult Vaccine-Preventable Diseases In The United States.” In this study, they explore the financial burden of diseases brought on by adults who avoid the 10 vaccines recommended by the CDC. One of those being the yearly flu shot that save thousands of lives every year. Yet, according to the CDC less than 50 percent of adults opted to receive the flu shot for the 2015 – 2016 season. It has been proven time and time again that vaccines are “one of the safest and most cost-effective health interventions,” and the study goes on to confirm the impact of contrary thinking:


Low vaccine uptake means that preventable diseases result in costs to individuals and society in terms of deaths, disabilities, and economic losses from doctor visits, hospitalizations, and lost income.

According to the study, vaccine-preventable diseases among adults carries an estimated economic burden of approximately $9 billion – with almost 80 percent ($7.1 billion) attributable to the unvaccinated. By simply deciding to not get your yearly flu shot, you could become a member of the largest burden group at 65 percent ($5.8 billion). 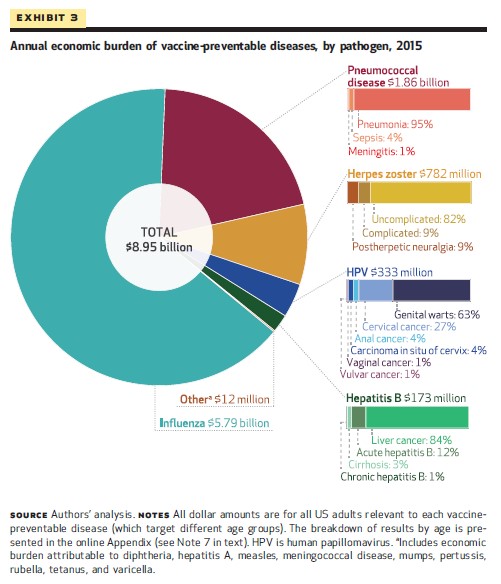 The Washington Post also covered this study citing it as “The $5.8 Billion Argument for Getting Your Flu Shot.” They recognize that vaccines are in fact considered one of the most powerful medical advances of our time. Even so, they go on to state that nearly two decades of controversies - as a result of a fraudulent study - has created an epidemic of misunderstanding around the safety of vaccinations leading us to this burden.

As the study demonstrates, it’s imperative that we appreciate the value of vaccines and take steps to improve not only our personal health, but also the economic health of our country. The authors conclude with expectations that:


By highlighting the tremendous financial burden that unvaccinated individuals place on the economy and the health system, we hope that our estimate will spur creative policy solutions…

Read CDC highlights on vaccines and immunization here.
More on This Topic