February 15, 2012
As we celebrate Black History Month, we should take time to recognize the contributions made by George Washington Carver and understand their relevance to today’s development of the bioeconomy. Carver was one of the founding fathers of the “chemurgy” movement, the branch of applied chemistry that derives industrial products from agricultural raw materials and the predecessor of modern industrial biotechnology. 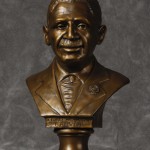 BIO's George Washington Carver AwardCarver, born into slavery in Missouri in 1861, left home at about 10 years old to pursue an education. From an early age, Carver pursued an interest in plants and ended up earning a bachelor’s degree in agricultural science and a graduate degree from Iowa State University. Carver spent most of his career teaching and researching at the Tuskegee Normal and Industrial Institute in Alabama, devoting his time to teaching sustainable farming, which for him included developing new uses of agricultural products that could boost farm profits.

To encourage and aid farmers in adopting sustainable practices, Carver and his students developed more than 300 industrial uses for peanuts, sweet potatoes and other crops that could be grown in rotation with cotton and corn. Carver helped educate Southern farmers on the need to conserve soil productivity through crop rotation. Carver’s inventions included everything from plastics, glue, soaps and paints to dyes for cloth and leather, medicines and cosmetic ingredients made from peanuts, sweet potatoes, or other crops and agricultural residues.

Industrial biotechnology developed in ways that Carver might never have imagined, but it remains true to the goal of a sustainable bio-economy that includes production of useful everyday products. Continuing his legacy, industrial biotechnology companies today are developing new methods to use renewable agricultural resources to manufacture fuels, plastics, chemicals, pharmaceuticals and food ingredients.

In 2008, BIO created the George Washington Carver Award given annually at the World Congress on Industrial Biotechnology and Bioprocessing. It is given to innovators in academia, the private sector or government whose work has tapped industrial biotechnology to develop sustainable biobased processes or products. A scholarship, given in the name of the recipient, accompanies the award.

BIO presented the first annual George Washington Carver Award to Dr. Patrick Gruber, CEO, Gevo, Inc., celebrating his accomplishments in creating and commercializing a new plastic made from annually renewable resources. In 2009, BIO awarded DuPont Chairman of the Board Charles O. Holliday, Jr., recognizing his commitment to industrial biotechnology as a tool for sustainable business growth. In 2010, the award went to Dr. Greg Stephanopoulos of MIT who is currently Bayer Professor of Chemical Engineering at MIT. His work now focuses on engineering a microbe for cost-effective production of oil and biodiesel. Last year’s award was given to Feike Sijbesma of Royal DSM NV for leading his company's efforts to promote bio-based products over those relying on fossil-fuel resources.

The 2012 Carver Award winner will be announced at the 9th Annual World Congress on Industrial Biotechnology and Bioprocessing in Orlando, Fla., April 29 - May 2 at the Gaylord Palms Resort & Convention Center.
More on This Topic