How Biotech is Being Used to Battle Drought

July 16, 2015
According to the Wall Street Journal, California’s drought is now in its fifth year and districts are asking homeowners to do everything from stopping watering lawns to taking shorter showers. But it’s in the state’s fertile Central Valley that the drought is causing the most economic pain. A preliminary study in May by the University of California, Davis, estimated the drought could cost 18,600 agriculture-related jobs and $2.7 billion in economic losses this year. 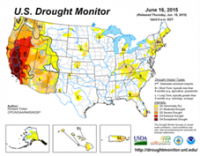 Here GMO Answers explains how biotechnology is being used to improve crops so that they use less water, which can help farmers tackle the devastating effects of drought:


"…Water is one of the most basic inputs needed to grow any crop, including the corn you might grill in your backyard during a summer barbeque. Increasing drought conditions, combined with a growing demand for water, is turning attention to agricultural water use. According to the International Service for the Acquisition of Agri-Biotech Applications (ISAAA), 'tolerance to drought and efficient water usage should be assigned the highest priority in developing future crops.' Farmers utilize many tools to use water as efficiently as possible, and recently, GM crops have been added to that list of options."


“Modern technology spans a broad spectrum, from improved weather models predicting seasonal rainfall to monitoring moisture levels in soils across the farm, to a range of new crop cultivars better able to withstand the stress of reduced water. Farmers should be able to adopt all of these tools to maximize their use of available water, and optimize food production, while minimizing environmental impacts.”

…. Biotechnology has played a role in helping farmers adopt conservation tillage practices, with the introduction of herbicide resistant crops. This technology can continue to provide benefits to farmers with the introduction of drought resistant traits. In addition, advanced molecular breeding has enabled the identification of and selective breeding for drought tolerance traits that are native to a particular crop. Other options include modifying planting density, changing crop rotation patterns, upgrading irrigation equipment and planting cover crops.

Drought isn’t a new phenomenon; it’s an issue humans have dealt with for thousands of years. Dr. McHughen explains:


“Drought has visited human populations since the beginning of agriculture, and our ancestral and current agricultural scientists have been developing new breeds with better water use efficiency traits and other strategies (e.g. irrigation) to fight the ravages of drought. But we’ve reached the limit of what we can do with conventional technologies and must find new mechanisms. Biotechnology is one obvious tool to apply by offering better drought resistance genes, stress response genes and associated traits.”

Summer is the growing season for many crops, and a lack of water availability can hinder food, fiber and fuel production. Crops that are developed to perform well under drought conditions are valuable tools for modern farmers.

Heat tolerance is another trait that is closely related to drought resistance. Dr. Curt Hannah at the University of Florida says, “Certainly changes that lessen the adverse effects of drought will become increasingly important as growth conditions change. Lessening the effects of higher temperatures also associated with climate change is a critical factor.”

...He goes on to explain that there are other ways to achieve this goal without using biotechnology. He says, “While, in theory, we could screen large collections of diverse germplasm for these changes in a more conventional approach, such an approach has no guarantee of yielding positive results and would be a huge amount of work. The transgenic (GMO) approach is more direct, more precise and has a much higher probability of working.”

Learn more about current and future crops that may be helpful tools for farmers when dealing with drought: