How does the NBI perform in the last quarter of the year?

October 8, 2012
Does the NASDAQ Biotech Index (NBI) outperform the broader market in the last three months of the year, or underperform?

The NBI tends to be up in the 4th quarter, but a lot of that has to do with the overall market, not the biotechs. Here are the returns for the last quarter of the year for the last 20 years: (source: Factset) 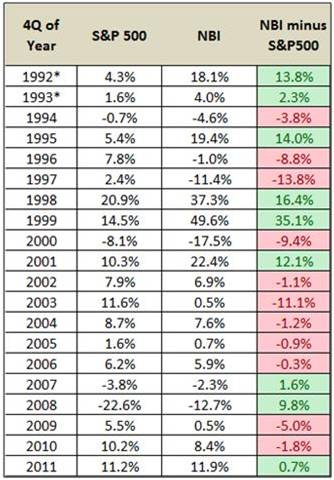 However, the NBI performance relative to the S&P 500 has been more like a coin toss than a trend. The NBI has outperformed in only nine of the 20 (45%) 4th quarters since 1992. The median return after taking into account the market (NBI return minus S&P500 return) is only -0.6%.

It is hard to argue for any significant pattern in outperformance considering we are only looking at n=5, but with only two of the five quarters showing outperformance, I think it is safe to say there is not a trend. These two cases of outperformance were in very different markets, with 1992 being a strong quarter, and 2008 being the big crash. Interestingly, both cases of election year 4Q outperformance occur during Democrat wins by candidates that supported healthcare reform.

One reason this is on investors’ minds is that the NBI is up 55% in the last year, and 40% year-to-date (see table below). Big runs like this tend to spark the “now where to?” discussions, which will most certainly be overheard tomorrow and Wednesday at the BIO Investor Forum.

Here is the year-to-date performance as of October 8th, 2012: (source: Factset) 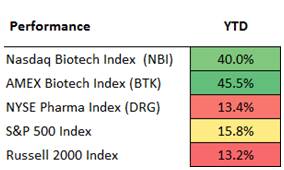