How “Non-GMO” Claims Can Mislead Consumers

January 5, 2017
If you’re like me, you probably caught up on a lot of television over the holidays.  Unfortunately, this also meant catching a lot of new commercials.  I’m continually annoyed by trends in declaring products “non-GMO” or “GMO-free” as if that’s a designation to be valued (and paid for with premium pricing).

Let me state up-front that organic foods and products with the “Non-GMO Verified” butterfly label have a place in the consumer marketplace.  Many shoppers swoon over Kashi cereals and Amy’s frozen entrees, as tow examples.  I’m partial to Stacy's Simply Naked pita chips myself.

But I have also seen non-GMO labels on water, dry cleaning and bubble bath.  Now we have non-GMO Centrum vitamins.  But when Hunts announced over the holiday that it doesn’t use any genetically modified tomatoes in its ketchup, tomato paste and barbecue sauce, people pushed back.

Kavin Senapathy writes in Forbes about the backlash that erupted after Hunt's announcement and how ‘Non-GMO” claims without context can hurt consumers, farmers and society:

“No matter how far afield you look, you won’t find a single genetically modified tomato among our vines,” Hunt’s, the iconic company announced on December 26th. A video accompanying the announcement depicts a field of tomatoes and a message:  “No GMOs in sight.”

The backlash was swift, with hundreds of comments from consumers, farmers and scientists criticizing the company for fear mongering and pandering to “the superstitions of misinformed extremists.”

“It's terribly unfortunate you're lying to consumers, Hunt's. GMO tomatoes are not available to the market and yet you're implying they are,” one critic wrote.

Keep in mind that “Genetically Modified Organism” is an arbitrary term. Virtually all the foods we eat, including those labeled natural, organic, or even heirloom, have had their genes modified using unnatural methods, including exposure of a plant to chemicals and radiation, as I’ve discussed several times, including here and here. 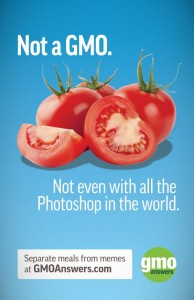 Even though the term has little meaning, “GMO” has come to denote modern molecular genetic engineering methods used to achieve specific, targeted traits, from insect and disease resistant crops to apples that don’t turn brown. By this definition, there are no “GMO” tomatoes on grocery shelves, from Hunt’s or any of its competitors. And shop with competitors is what several commenters on the company's page say they'll do:

“Way to go, Hunt's - jump on the anti-science band-wagon in order to bilk a premium from some rubes. What's next? Homeopathic ketchup? I guess it's Heinz for me from now on.”

“I like Heinz anyway. And science. No fearmongering with my fries, thanks.”

Sure, slapping a no GMOs claim on a product might be an easy way to capitalize on a popular trend. But companies need to look at the bigger picture, and realize that anti-GMO marketing contributes to consumer rejection of genetic engineering.

This isn’t only a science problem, this is a justice problem. To stifle the GM tools in a larger agricultural toolbox can mean harder, more manual labor for farmers. It means that farmers in Uganda, where bananas are a staple food, can’t use GMO banana plants resistant to disease threatening to wipe out the crop because of ideological regulations. It means farmers in India deal with widespread crop damage and excessive insecticide spraying because of a drawn-out regulatory process for GMO brinjal (eggplant), a staple crop in the country.

Sometimes so-called “non-GMO” techniques don’t work well or at all, because some plants have long breeding cycles, some plants are sterile, or a particular trait is difficult to achieve in other ways.


Breeding methods are like tools in a larger agricultural toolbox, and it makes sense to pick the best tool for a job. Sometimes the best tool is “GMO" and sometimes it’s not, but it has never been used unsafely.

“[B]asically every major scientific organization that has looked into GM food safety has gone on record stating that GM foods are safe (developing them actually involves altering hundreds or thousands of times fewer genes than the breeding methods for non-GM foods),” one commenter wrote, citing a statement from the American Association for the Advancement of Science. Indeed, it’s an accepted fact that agricultural genetic engineering is safe—nary a sniffle or stomach ache has resulted from it. As the AAAS report puts it, “consuming foods containing ingredients derived from GM crops is no riskier than consuming the same foods containing ingredients from crop plants modified by conventional plant improvement techniques.”

Others pointed out that Hunt’s shouldn’t be rejecting “GMOs” even if there aren’t any GMO tomatoes on the market, explaining that genetic engineering is beneficial, and may prove necessary for sustainable tomato farming in the future.

“When a food company shuns science to pander to activists I avoid their products,” wrote scientist and prolific communicator Kevin Folta. “GE tomatoes are on the horizon that could cut environmental impact of tomato farming. I'd like to see you supporting tools for sustainable Ag, rather than sleazy food-babe fear mongering.”

There are over 600 comments and growing since the Hunt's post published on Monday morning. The company has yet to respond.

A statement received by email from a representative for Conagra, which owns Hunt's, reads:

"Many people are interested in what's in their food, and we want to provide them the information they are looking for. As a company, Conagra Brands believes in giving people choice by offering foods that are made with and without GE ingredients. While it’s true that all tomatoes are non-GMO, there are tomato products that contain GE ingredients. We recently updated many of our Hunt’s tomato products including diced and crushed to meet Non-GMO Project Verification standards, so look for the seal at shelf."