How to Stand Out From the Crowd; Promoting Oklahoma Bioscience

August 16, 2011
BIO’s annual International Convention has emerged as a must-attend event for countries, states and regions that are hungry for industry investment. The convention gives them the ideal platform to publicize and promote what they have to offer to industry leaders in terms of economic development opportunities.

International and domestic public officials take the time to attend because they recognize the enormous potential of the industry. This year’s event drew more than 100 public officials and 11 U.S. Governors.

Sheri Stickley, President of the Oklahoma Bioscience Association sent in the following wrap-up which provides a good sense of the value that states derive from the event. Give it a read:


The BIO International Convention is an important annual event for the Oklahoma bioscience community, and 2011 was no exception. Each year, BIO offers a unique opportunity for our bioscience companies to gain valuable information, secure strategic partnerships, and find new customers. Plus, it’s a great venue for the rest of the world to learn more about Oklahoma’s dynamic, diverse bioscience sector. 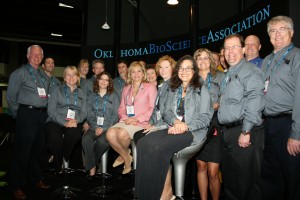 As President of the Oklahoma Bioscience Association, I was pleased that Oklahoma brought a 70-member-strong, statewide delegation to D.C. this year. Our industry has nearly a $7 billion impact on the Oklahoma economy, so all of us go ready to talk about the “Oklahoma Story.”

We were especially glad to have Gov. Mary Fallin join us at BIO this year. Her attendance underscored the state’s strong commitment to life sciences as a key industry sector. Having Gov. Fallin at our state reception and working the booth significantly upped our game. 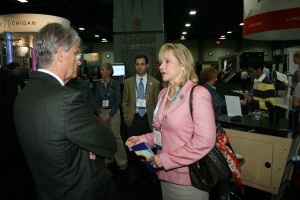 Oklahoma’s pavilion saw a record attendance of 2,712 people who agreed to be scanned for our Kindle giveaway. Many of the attendees were surprised at the strength of Oklahoma's presence. Within minutes of the convention opening, individuals from throughout the world were visiting the OKBio pavilion, learning about Oklahoma’s bioscience industry and getting their pictures taken with OKBio’s special guest: a life-size cut-out of Oklahoma City Thunder standout Kevin Durant! We know more people visited our booth than we were able to scan, so we’ll be prepared with additional scanners next year!

From our companies' perspectives, this was a successful trip. Dave Karlman, Chair and CEO of Otologics Pharmaceutics, Inc., told me, “This has been the most productive BIO for our firm since its inception. The leads, industry knowledge, and relationships forged will serve OPI in the near and longer term as we extol Oklahoma as an exciting place to launch and foster life science companies.”

Craig Shimasaki, President of LumiDX and Biosource Consulting, said it was “a very productive and beneficial conference for the future of” his companies. Both LumiDX and Otologics were recipients -- along with Onconos, Inc. -- of OKBio scholarships to attend BIO, funded by the Oklahoma Business Roundtable.

We believe the state made a strong impression, and for us, BIO continues to be a worthwhile investment in the future of bioscience in Oklahoma.