Informa Agribusiness: Systematic Change Needed for U.S., China and the World to Benefit from Biotech Innovation

May 31, 2018
In 2017, U.S. farmers exported nearly $20 billion worth of agricultural products to China, and nearly two-thirds of those products involved biotech innovation. But a brand new study estimates that the economic benefits of the trade could have been higher, if not for China’s persistent delays in approving imports of biotech crops.

This week, Informa Agribusiness Consulting Group (Informa) released the report The Impact of Delays in Chinese Approvals of Biotech Crops, quantifying the economic impact of China’s delays globally, in the U.S. and in other major cultivating countries, including Argentina, Brazil and Canada.

And the economic impact is significant. 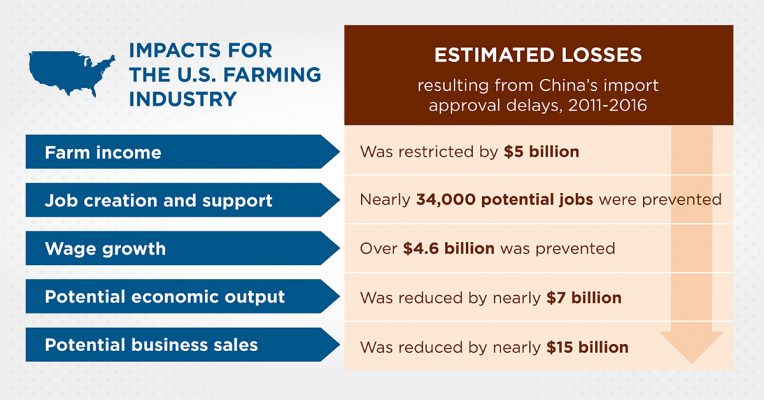 As Bill Tomson with Agri-Pulse notes in his piece on Informa’s report, China’s delays are, in part, the result of an “asynchronous” approval process:

“Whereas biotech seed companies can begin the approval process in several countries around the world at the same time to insure international acceptance, that’s not possible in China. Despite repeated requests over the years, China continues to insist that it will not even begin the process until a cultivating country like the U.S., Brazil, Argentina or India first finishes the process.”

And this unnecessary added requirement by China is not a matter of one or two years.

As Tom Polansek with Reuters notes in his piece on the Informa report, “companies such as Bayer AG, Monsanto Co, DowDuPont and ChemChina’s Syngenta have been waiting as long as seven years for China to approve strains of soybeans, canola and alfalfa.”

Looking at the next five years, Informa forecasts that if China were to establish a predictable, science-based approval process, the U.S. economy could see an increase of $4.9 billion in farm income, more than 19,000 jobs created, a $4.4 billion increase in wage growth and potential for a $7.3 billion increase in GDP.

BIO’s CEO and President Jim Greenwood emphasized this point in his statement on the report, highlighting the need for “systematic change”:

“The goal of the seed technology industry is to work cooperatively as a partner with the Chinese government to bring new production technologies to farmers around the world, including China. The outcome of this partnership will be an increase in global food security and greater economic activity in rural communities.”

And as Greenwood notes, the Informa report concludes that China stands to gain from systematic change, including access to new technologies for feeding its own population as well as lowered food prices for Chinese consumers. 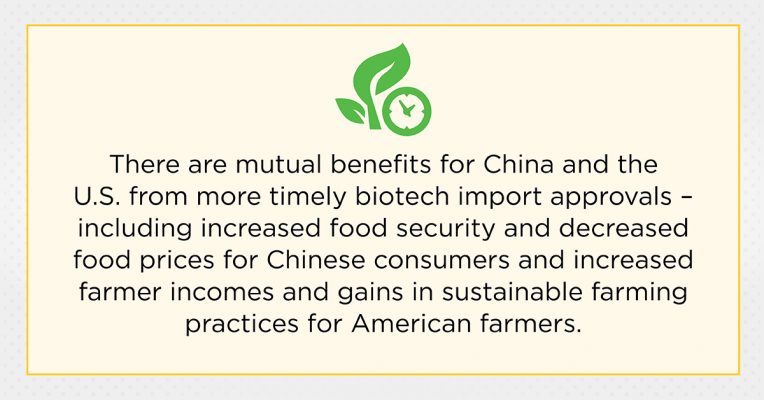 BIO’s Vice President for International Affairs Matt O’Mara says that the biotechnology industry is simply looking for a win-win solution for the U.S., China and the world, reiterating that for that to happen “Bottom line, we need a sound, predictable, science-based process and one that moves these products through in a reasonable time.”

To view the full report, executive summary and methodology for the Informa report, click here.

To read more about the economic impacts of China’s delays in biotech approvals, check out the news coverage from yesterday’s report roll-out.