July 2, 2015
The IP Track at BIO 2015 had a number of incredible educational sessions concerning the most relevant topics in the biotech sector.

Let's look back at what top experts in the IP field had to say about the changing nature of patentable subject matter:

This panel came right on the heels of the Federal Circuit's June 12 decision in Ariosa Diagnostics, Inc. v. Sequenom, Inc., which will have significant long term implications for eligible subject matter.

Sequenom's patent covers methods of detecting paternally inherited nucleic acid of fetal origin; based on a discovery that cell-free fetal DNA is detectable in pregnant woman's plasma. Essentially, this patented invention today allows physicians to assess the health of a fetus by testing the pregnant mother’s blood.  Since it became available 5 years ago, this new test greatly reduced the need for frightening and invasive amniocentesis or chorion villus biopsy procedures. Despite the revolutionary nature of this invention, the Federal Circuit affirmed the district court's holding that the method was invalid under 35 U.S.C. § 101. Applying Mayo, the Federal Circuit held that all claims in the suit were ineligible:

Most unsettling, in Judge Linn's concurring opinion, he argued that the steps of the method were new and "ground breaking." However, the Supreme Court's "blanket dismissal of convention post- solution steps in Mayo left no room to distinguish the Ariosa claims on those grounds."

As the litigation experts were quick to point out, the Federal Circuit's decision in Ariosa endorsed a highly restrictive interpretation of the patent-eligibility test. This will impact how the USPTO revises its Interim Eligibility Guidance moving forward.

Raul Tamayo of USPTO then provided session attendees with an idea of how examiners have thus far been interpreting the judicial decisions by outlining the subject matter eligibility process in the Interim Guidance: 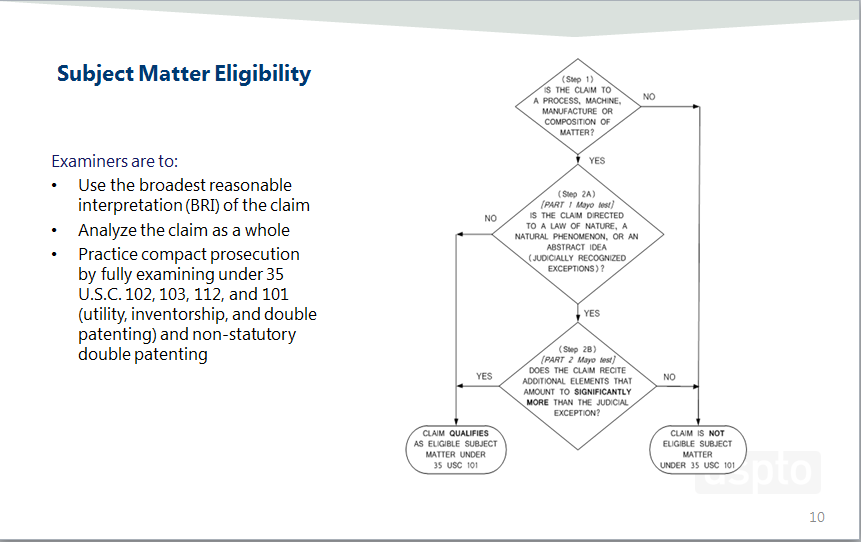 The Federal's Circuit's ongoing decisions on subject matter eligibility cases will inform the USPTO's gaps concerning screening/diagnostic claims. Tamayo informed the session that updates to the Guidance will be provided; incorporating feedback from public comments, and additional examples will be developed and distributed to provide more clarity.