February 25, 2013
When investors talk about alternate exits for private companies beyond the traditional IPO they are usually referring to reverse mergers, if not outright acquisitions. However, another route is gaining some traction with sophisticated biotech investors – the so-called Form-10 pathway. Although it can be used in combination with reverse mergers, recent SEC rules applied to reverse mergers have shifted interest towards a more direct Form-10 approach to public markets.

At last week’s BIO CEO & Investor Conference, Mintz Levin’s Bill Hicks hosted a panel on the topic. In his view, a number of well positioned biotechs can benefit from this pathway. The Form 10 approach can help match the demand of interested investors with the right company, at the right time.

So what is this Form 10 pathway and why would companies choose this route vs. a traditional IPO? Let’s start with a simple diagram of the two routes… 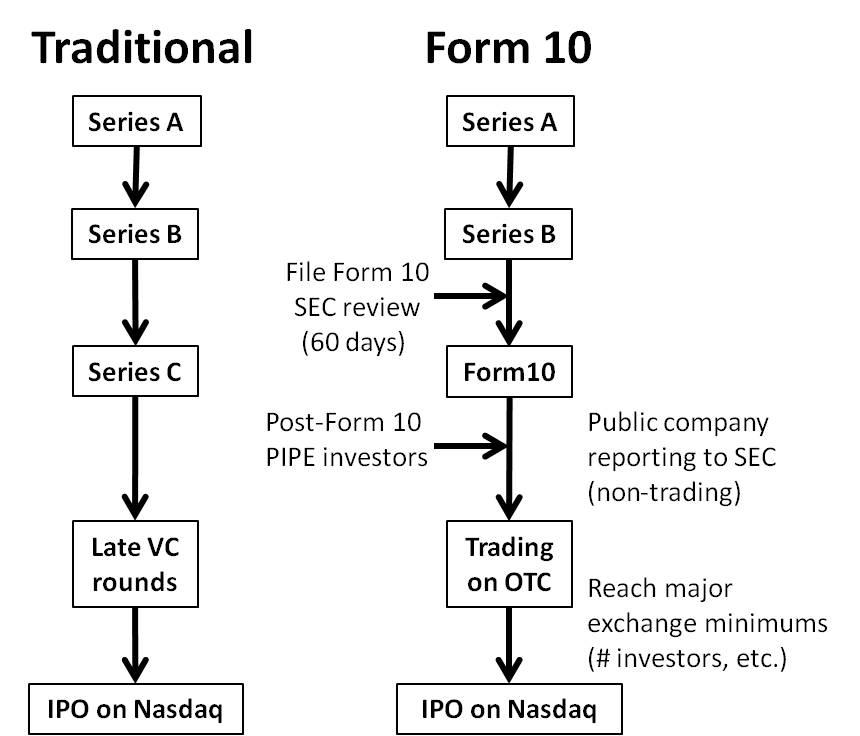 A Form 10 filing is used by private companies to register a class of securities with the SEC. However, these securities do not need to be publically traded. A company can voluntarily file a Form 10, and after a 60 day SEC review period, have an effective requirement to publish 10K, 10Q, and 8K documents just like any publically traded company. Once the Form 10 is in effect, institutional public equity funds that have been restricted from investing in the private company can now invest in these public, yet non-trading securities. The structure of the transaction is similar to a PIPE (Private Investment in Public Equity), but there is not a traded price quote to use as a reference.

Once these investors have valued the company and invested accordingly, the company will float securities on the OTC (Over-The-Counter) exchanges. Here, retail investors can pick the shares up, albeit with some potential liquidity challenges. When the investor base reaches a specified amount (say 400 holders of round lots) and the company has been in existence for >2 years, an IPO is conducted on a larger exchange such as the Nasdaq. Now the stock trades in a liquid environment that can reach broader pools of investors that may not have picked up the OTC listing.

Lackluster IPOs: Public markets have been unfriendly to biotech IPOs since 2008. For example, actual dollar amounts raised on IPO dates have been 30% below the S-1 filing amount, on average. The blunt exposure to the retail “day of” pricing in a traditional IPO makes for a lot of uncertainty in the ramp up. Venture investors really feel the pain when they are asked to pony up at the final stretch.

However, the Form 10 pathway offers clarity about how much you will raise and with what institutional funds. “You get the money in the bank first. You control the valuation to an extent with a small, long-term focused institutional investor base” explains Michelle Dipp, MD, PhD, CEO of Ovascience.  Ovascience is one of the few firms that has taken this route and currently trades on the OTC as OVSC.

Price discovery in the traditional IPO process involves multiple bankers and a wide range of investors with varying focus and timelines to settle on an exact price. Peter Kolchinsky, PhD, Managing Partner at RA Capital, makes the case that the traditional IPO was made for a different type of company long ago, and was not designed with the complexity of biotech in mind. With the Form 10 route, there is a price range established before reaching the Nasdaq IPO with its wider range of retail and generalist investors. Other issues with the standard direct-to-Nasdaq approach are the expensive SEC reviews and road shows prior to the raise.

Constricted venture funding: Venture investment has turned away from biotech in recent years, and the number of venture funds that have the ability (or will) to invest in the life sciences has shrunk considerably. As described in a prior post, the percent allocation to healthcare is declining, giving way to IT opportunities that offer quicker returns with less risk. Biotech investments in multi sector venture funds must compete with time horizons to exit. That time horizon has been getting longer and longer. Any new path to exit that can cut this time frame will be advantageous for the venture community.

The Form 10 process also opens up a new set of investors that can bridge the entry to a major exchange. There are a few sophisticated public equity firms with deep industry expertise that see a lot of value in the private space, but are restricted to public only investments. By publically filing with the SEC after Form 10 effectiveness, a company opens itself up to this investment pool.

Caveat Emptor: Form 10 is not for every biotech, or every investor. It is really for the high quality companies with a strong story coupled with investors that are willing to be in for long term. Furthermore, it will not work unless you have retail buyers that will come in after the big institutional investors are in, when the IPO launches. To build the strong retail following though, you need to have the strong institutional support that can get the story out.

Daniel Dubin, MD, Vice Chairman at Leerink Swann and Founder MEDACorp adds that “the timing must be choreographed, as you don’t want the launch to look like some of the reverse mergers of the past”.

Company management must also want to go down this unconventional path. They must build relationships with the buy-side in advance of Form 10 filing. The bankers will have a tough time bringing in a retail PIPE when the company is not yet traded, so having a solid network on the buy-side will pay off. The reality is that there are more buy-side funds that can buy into IPOs than there are Form 10 investors. Dubin sees more generalist interest in the IPO space today, but for a fund to invest in the Form 10 entity, the fund needs to be dedicated to biotech, have the resources to understand the complexity of the deal, and the backing of the PMs, CIOs, etc.

Companies that have a recent late round that is flat or perhaps a down round might push investors away from entering a Form 10 investment even when there is a great technology or drug. Late stage VC rounds may set a precedent that gives a reference price that might be under valuation metrics that public buy-siders might apply. Companies that do not have a long trail of VC rounds are better positioned for the Form 10 pathway, even after Series A or B. This establishes an institutional public equity reference price that new investors can once trading beings.

Why should a company try to do this so early, say at Series B or even A? Peter Kolchinsky believes good companies should go public sooner. He sees it this way: Imagine when you get your incredible Phase II data and you are public – the market rewards you and values you instantaneously and the stock price can go “sky high”. However, if you are private, the next round of venture investors that comes in will ask “what was your last raise” and assign a simple multiple to that.

For companies with recent late VC financing, the traditional IPO might be more acceptable to the buy-side as they will require the comfort of an immediate, larger pool of investors supporting the IPO price.

JOBS Act: The backdrop for both of these pathways is the changing policy landscape designed to make it easier for emerging biotechs to trade on public exchanges. BIO was very involved in advocating for the proposed changes listed in the JOBS Act. Charles Crain, Manager of Policy & Research at BIO, says that the new rules in the IPO On-Ramp have lessened the burden of Sarbanes-Oxley compliance and Dodd-Frank disclosures, as well as made it easier to generate interest in a small company IPO.  Of the 11 IPOs undertaken by biotech companies since the JOBS Act was signed, 8 used provisions in the law to ease their offering.  The JOBS Act also lifted the ban on general solicitation under Regulation D, which could be useful to fill out your investor base after your Form 10 filing.  BIO is currently working with the SEC to get the JOBS Act fully implemented, including the changes to Reg D, so that companies can take advantage of the capital formation provisions in the law.

The JOBs Act has helped, but Bill Hicks argues it has only yielded incremental benefits so far. He sees the Form 10 pathway as a “deconstruction of the traditional IPO route”, offering significant benefits to biotech companies and investors that qualify for it.
More on This Topic