July 24, 2015
Rosalind Franklin’s use of X-ray diffraction images led to the discovery of the double helix structure of DNA in 1953. Her work was published alongside, but not recognized as a contributing factor to, Francis Crick’s and James Watson’s model of the structure of DNA. BIO’s 2015 Rosalind Franklin Award, sponsored by the Rosalind Franklin Society, is a way to honor Rosalind Franklin’s discoveries by awarding it to a woman who exemplifies her leadership and pioneering spirit. This year, we were proud to present this award at the BIO World Congress on Industrial Biotechnology to Jennifer Holmgren, CEO of LanzaTech:

To celebrate the life, work and symbolic power of this remarkable heroine in science, the society recognizes the work of outstanding women scientists, fosters greater opportunity for women in the sciences, and motivates and educates young generations of women.
– Rosalind Franklin Society 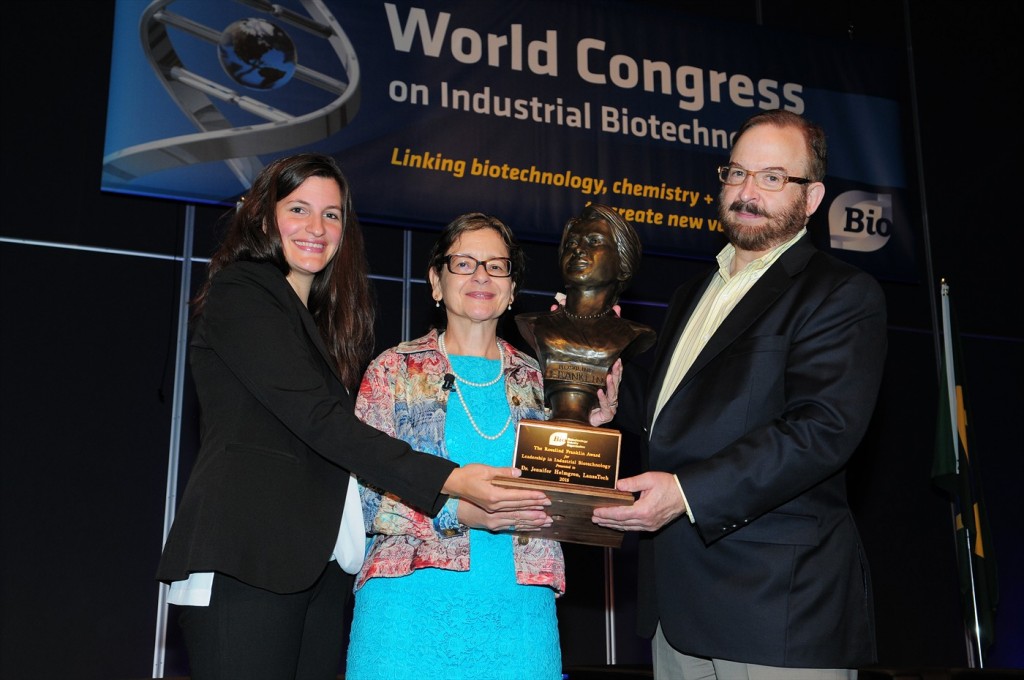 Holmgren humbly accepted the award and immediately stated, “Wow, this is cool!” She cheerfully thanked all of the people who supported her. After her thank yous, she immediately asked audience members to think how old they will be in 2050. Holmgren admitted she will be 90 and expects to live until then. Her point in asking this question was to highlight that climate change is typically viewed as a problem “our grandchildren will have to deal with.” She disagreed and stated that the two-degree Celsius rise in temperature is closer than we think. She called the people in the audience to action.

We have to be smarter than the problem, and we are. We have to become bigger risk-takers, we have to not worry so much about the people that criticize us, the people who call to inaction and say what we do is wrong.
- Jennifer Holmgren

She then recited her personal narrative. She was born in Columbia, but grew up in Los Angeles. She remembers that when she lived in L.A. there were times she couldn’t see the blue sky due to pollution; and there are still some cities around the globe where children cannot even see the blue sky. She also said that if the world’s temperature were to truly increase by two degrees, her lovely native country would not be able to grow and export its agricultural diamond, the coffee bean. She closed her speech by reminding everyone of their crucial role as a superhero.

I believe that carbon will define our generation, all of our generations; we will be defined by how we treat carbon, how we find it and how we deal with it. I would argue that all of you scientists in biotechnology will actually be the superheroes of the generation because we will be the ones who make a difference.

The LanzaTech process is the only process that converts waste gases to fuels and chemicals, from any source of CO or CO2. From waste industrial gases, to stranded methane, to waste forest biomass and municipal solid waste, LanzaTech can take advantage of numerous low-cost and widely available feedstocks. - LanzaTech

Congratulations to Jennifer Holmgren for receiving the 2nd annual Rosalind Franklin Award. Coming from a young woman scientist, you are such an inspiration!

“Much like Rosalind Franklin, Dr. Jennifer Holmgren has always been motivated by achieving things that others said could not be done. Her drive knows no barriers,” said Brent Erickson, executive vice president for BIO’s Industrial & Environmental Section.
More on This Topic