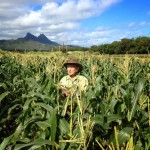 The media is reporting on a decision by a federal judge to postpone implementation of a new law in Maui County banning the cultivation of genetically modified organisms until he considers arguments in a lawsuit against the measure.

The Associated Press reports that both sides have agreed to delay the date the law goes into effect, U.S. Magistrate Judge Barry Kurren said in his ruling.

Monsanto Co. and a unit of Dow Chemical Co. filed a legal challenge against the county last week to stop the law. Employees of the companies and local Maui County businesses joined the lawsuit.

They argue that the law would harm the economy and their businesses. They said the court has already ruled in another case involving a Kauai law regulating genetically engineered crops that the state, and not the county, has jurisdiction over the issue.

Maui voters created the law with a ballot initiative they passed by a vote of 51.19 percent to 48.81 percent. The measure was to take effect after officials certified the election results, which was expected later this month.

Kenneth Robbins, an attorney for the companies, said Kurren was saying in his ruling the plaintiffs have shown they could potentially suffer irreparable harm if the law goes into effect.

The case put the county in the awkward position of asking a judge to order it to not enforce one of its laws. But Maui County spokesman Rod Antone said it's hard to enforce the law when it's being challenged. He said the county wants all pending legal matters to be resolved.

The county is preparing to implement the law if it survives this legal challenge, Antone said.

Kurren asked attorneys for the county and the plaintiffs to explain why he should continue blocking the law while he hears arguments. He gave them a Dec. 1 deadline.

Michael Carroll, an attorney for the ballot initiative's authors, plans to ask Kurren to hold off from deciding this case until a state court on Maui rules on a separate lawsuit his clients filed Wednesday. That lawsuit seeks to compel the county to implement the law.
More on This Topic