July 19, 2012
There’s a lot of buzz right now over the new “Arctic Apple,” genetically engineered to resist browning due to cutting, biting and bruising. 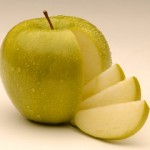 The Golden Delicious and Granny Smith apples developed by Okanagan Specialty Fruits Inc. (OSF) are exactly like a conventional apple in every way, except for its improved trait, that will – hopefully – increase apple consumption and popularity.

The U.S. Department of Agriculture’s Animal and Plant Health Inspection Service (USDA APHIS) recently announced that it is now accepting comments on OSF’s Arctic® Apples, paving the way for one of the first biotech products which directly benefits consumers.

Andy Pollack reported for The New York Times that the technology could make sliced apples more attractive to serve or sell. Apple slices are already becoming more popular as a healthful snack, sold in bags in supermarkets and included by McDonald’s in its Happy Meals for children.

Neal Carter, OFS founder and president hopes the Arctic Apple will do for apple sales what baby carrots did for carrot sales.  He also said that growers would have fewer apples rejected by supermarkets because of the minor bruising that is common from handling of the fruit.

There has been some amount of concern from apple producers who fear the potential competition or who question whether the improved apple might tarnish the “natural” image of conventional apples.

The Seattle Times put that concern to rest in an editorial saying:

“I’ve just never got this “natural” stuff. If you plant a tree, it grows, and apples appear on it, is it not natural? Is ‘natural’ supposed to mean no human involvement in changing the species? Well, then Braeburns are not natural.  An ear of sweet corn is not natural, nor is a russet potato. How about a dog? Is a wienerdog natural?...

“It’s delightful that a biologist offers an apple that doesn’t turn brown. Yeah, the brownness of cut apples is not a life-threatening problem, and yeah, you can treat sliced apple with vitamin C and calcium, as some fast-food places do, or with lemon juice, to keep them looking nice. But if the Arctic Apple stays fresh-looking naturally (without artificially adding lemon juice to it), it's a good thing.”

BIO’s Executive Vice President for Food & Agriculture Dr. Cathleen Enright says the Arctic Apple is ushering in an exciting era for the agricultural biotechnology sector because we’re starting to see next generation products that directly benefit the consumer.

The Arctic Apple  will enable moms to serve sliced apples that won’t turn brown, will allow caterers and food service providers to enhance the appearance of fresh fruit displays, and will cut down on waste at retail since apples won’t be discarded because of bruising.  More apples eaten and less thrown away – THAT’s just what the doctor ordered!
More on This Topic