October 12, 2012
The kinase inhibition field has had plenty of ups and downs and over the last decade, but when we take a look at recent approvals and NDA filings there seems to be a strengthening of the field. There are now 16 kinase inhibitors that have been approved and five seeking regulatory approval in the next few months. The last two years in particular has been a boom for the KIs, with seven approvals, three of which target new pathways. 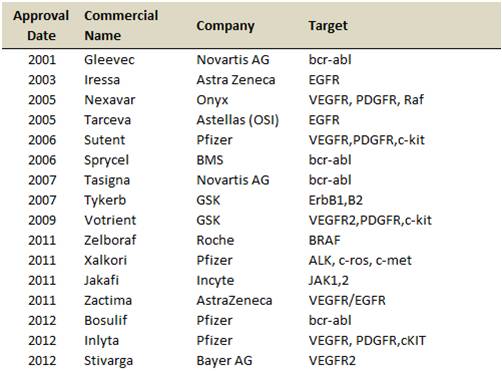 Tuesday's panel on kinase drug development at the 2012 BIO Investor Forum highlighted lessons learned from setbacks in the clinic, post approval surprises, and some ideas for overcoming these issues.

The panel, moderated by Biocentury’s Steven Edelson, started off with a look at some of the new ideas in the space and resolved issues of the past. For example, there is a significant interest in the overlap of pathways of the immune system and that of cancer signaling pathways.  Some kinase targets, once inhibited, may boost immune surveillance and promote tumor cell death via immune targeting. Due to the overlap, targets for cancer treatment are now becoming targets for inflammatory diseases, and vice versa. For example, Btk inhibitors studied in the Leukemia and Lymphoma settings, which act to shut down proliferation of B-cells by blocking immune receptor signaling pathways, are simultaneously being studied in inflammatory diseases such as arthritis.

One of the challenging issues in the field has been the rise of resistance to targeted therapies via mutation. Nagesh Mahanthappa, PhD, CEO of Scholar Rock LLC discussed one option to overcome this – covalent targeting. Nagesh was formerly at Avila, and worked specifically on covalent modification of kinase targets. For the resistance issues that arose with the early EGFR kinase inhibitors (Iressa and Tarceva), and some of the bcr-abl drugs, Nagesh believes that it would be far more difficult for cancer cells to evolve around a covalent approach. Avila was acquired by Celgene earlier this year, and the EGFR compounds developed with Clovis Oncology are still on being tested under this hypothesis. Avila’s btk inhibitors are now part of the Celgene early stage clinical portfolio.

The other issue is that the low hanging fruit (the obvious targets) have already yielded therapies, so finding and validating new targets has become more challenging. If you look at the list in the table above, it is evident that a wide diversity of targets does not yet exist. EGFR, VEGFR, and bcr-abl have dominated development through approval. A few more targets have made it to the finish line in recent years (JAK, BRAF), and there is some exciting clinical data coming through on a few more (Btk, MEK), but not substantially more.  One of the reasons may in part be due to the challenges of obtaining specificity against a particular class of kinases, or a specific subtype.

Rob Armstrong, PhD, Vice President, Discovery & Preclinical Development at Ambit Biosciences is working on a number of new targets and drilling down on the specificity of the inhibitors as a key strategy. The idea of trying to designing inhibitors that hit multiple kinases selectively is a challenging task he says. In oncology, some compounds hit multiple targets, but the safety profile does not need to be as clean as it does when developing a drug for diabetes, arthritis, or CNS diseases. Nagesh mentioned that some of the kinase drugs under development in cancer are not extremely selective, but actually turn out to be better that very selective ones. However, as Ambit’s Armstong pointed out, it can be a slippery slope if you are hitting double digit percentages of the entire kinome. You never really know what kinases are ok to hit and which are not when the number you are hitting are so high.

Pamela Munster, MD, Director of Developmental Therapeutics at UCSF brought up the issue that there is a benefit to broad acting, pan-specific kinase inhibitors for oncologists. The worry might be that if research only focuses on mutant subtypes, then drugs that could treat a wider range of patients will not materialize. Rob asserts that it is a matter of understanding tumor biology and what kinases to target. Just choosing overexpressed kinases, for example, may not be enough. The complexity of signaling in cancer cells and the heterogeneity of tumors make the identification of a single mechanism of action difficult.

Pamela believes there is a benefit in focusing research on the small percent of responders to a kinase drug. By doing rigorous sequencing and biopsy analysis of these patients could lead to major breakthroughs in our understanding of how the drugs are really working. Currently, not enough research is spent uncovering the reasons behind the response rates. Costs to do these studies could be a limiting factor however. Furthermore, the timing of biopsy could lead to misinformation in terms of the timing of mutations and determining which mutations are giving rise to the metastatic cells which may have already departed from the core tumor.

Another strategy that can help the early understanding and validation of mechanism of action is to enroll healthy patients in phase I. In the oncology setting, this is certainly an exception, but can yield insight for investigators and in shorter time frames. Imaging or cell/tissue specific biochemical analysis can be used to peer into the pathways hypothesized to be shut down. Avila’s Btk program employed this to determine full saturation amounts to knock down Btk activity. This helped identify the lowest dose identified for the oncology patient trials, as well as provided a maximal dose for inhibition for the inflammatory disease setting. The first cohort in the oncology trials was able to enroll and complete much faster because of this data.

Jack Singer, MD, Co-Founder & EVP at Cell Therapeutics mentioned that off-target affects are a big problem for clinicians and there is a demand for more selective compounds and a better understanding of what else is being hit and what side effects that can lead to.

One observation from the table above is that all the approvals thus far have been for cancer indications. Perhaps that is due to the bar being so high for selectivity. For extensive use of these therapies they must be very selective, and this can be a challenging task with 500 other kinase targets to worry about. When the panel was asked if we can expect more non-cancer indications for this class of compounds, they all agreed there would more to come as issues of safety and long term use are overcome by better chemistry.

It could be argued that that time is closer than most people think. Pfizer’s JAK inhibitor, Tofacitinib, is currently under review at the FDA for arthritis and has the potential to be the first non-cancer kinase drug approved. Other companies have ongoing trials for kinase inhibitors outside of cancer, many of which could move regimens from injectable biologics to oral therapies.
More on This Topic