Making Food Crops that Feed Themselves

June 21, 2018
“By 2050, the world's population is expected to reach 9.8 billion. With limited land, and intensive farming already causing irreversible environmental damage, how can we feed the world without exhausting its natural resources?”

That is the question posed by reporters Ly Truong and Claire Press in a recent BBC article “Making food crops that feed themselves.” In an attempt to answer this question, Truong and Press visited Vietnam where rice farming is emblematic of this challenge.


Rice farming is essential for Vietnam's food supply and economy, but such a booming industry comes with an environmental cost.

Farmers are dependent on nitrogen-based fertilizers to boost yields. But excess nitrogen can wash away, polluting rivers and oceans, as well as evaporating into the atmosphere.

In a quest to find solutions to this challenge, which pits the livelihood of farmers against the health of the environment, Truong and Press visited with Dr. Pham Thi Thu Huong from the Field Crop Research Institute. In Vietnam, Dr. Huong and her team are looking at nitrogen-fixing bacteria as a possible solution.


As seeds, the treated plants are coated in nitrogen-fixing bacteria. Normally found in sugarcane, these bacteria enable the rice plants to extract nitrogen directly from the air, instead of being reliant on artificial fertilizer.

"As the plant grows, an aerobic relationship between the bacteria and the rice plant develops" says Dr. Huong. "This allows the bacteria to take nitrogen straight from the atmosphere in a form the plant can use."

This innovation has tremendous promise to reduce farmers’ use of nitrogen fertilizers, thus limiting the fertilizers impact on the environment.

Today there are more than 500 dead zones in the world's oceans, a figure that has quadrupled in the last 50 years. 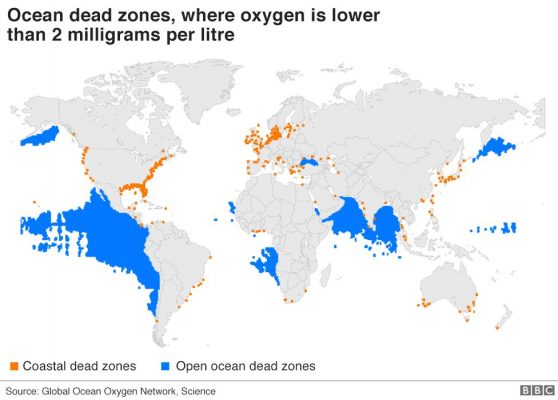 Dr. Huong’s work, however, is just one of many trials looking at nitrogen-fixing technologies to solve food security and environmental challenges. Entrepreneur and CEO of Azotic Ltd Peter Blezard has partnered with bioscientist Dr. Ted Cocking, the first to unlock the potential of nitrogen bacterium, to create a liquid or powder form of the ‘super bacteria’ with the hopes of helping other farmers reduce use of nitrogen fertilizer while increasing yields.


"Currently we are focusing on corn and soya crop trials in the US and Europe, and rice trials in Vietnam, Thailand and the Philippines," says Mr. Blezard.

"In Vietnam, we are seeing up to 50% reductions in nitrogen fertilizer, combined with a 15% increase in rice yields."

As Troung and Press note, however, not everyone is as convinced.


Microbiologist Dr. Tim Mauchline from the Rothamsted Research in the UK, doubts this technology can be replicated in all crop varieties, all over the world.

“The world is a big place with different climates, weather patterns, crops, and soil types,” he says.

“To think there's one silver bullet that can solve all of these problems, this would be fantastic, but I will be surprised if it is the case."

Whether or not this treatment is the ‘silver bullet,’ it is still a huge step forward in helping us meet the United Nation’s Sustainable Development Goals by 2030 and assuring that, by 2050, the projected 9.8 billion people on Earth will have enough food to survive.
More on This Topic