March 15, 2017
"March Madness" is a phenomenon that grips the national sports psyche from the second week of March through the first week of April. How Stuff Works explains that this term is "the moniker given to the National Collegiate Athletic Association (NCAA) Men's and Women's Basketball Tournaments; these tournaments determine the national champions of college basketball."

The NCAA tournament kicks off this Thursday, March 16, 2017 and, in preparation, fans are finalizing their brackets predicting this year's winner.

In celebration of the 2017 March Madness, AgEconMT wanted to see how its readers define the 2017 agricultural landscape. So, it created a bracket outlining some top tier issues of interest to the industry. Read here to learn more and fill out the interactive bracket to predict the defining issue for 2017. 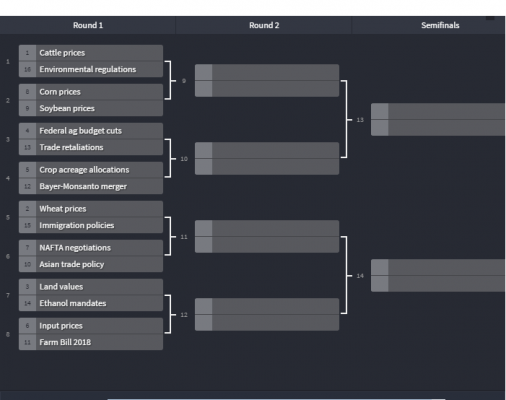