April 29, 2015
On Thursday, Philadelphia Mayor Michael Nutter declared Monday, June 15th “BIO Superhero Day” in the City of Philadelphia in honor of the BIO International Convention’s Everyday Superhero contest, which celebrates the contributions of the men and women of biotechnology who work tirelessly each day to heal, fuel and feed the world. 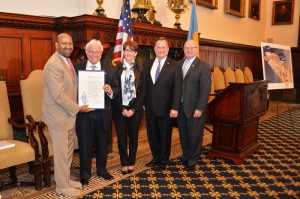 Joining Jim and Mayor Nutter were Pennsylvania Bio President Chris Molineaux, Philadelphia Convention Visitor’s Bureau President Jack Ferguson, and Molly Gatto, Director of Program Services at Make-A-Wish Philadelphia and Susquehanna Valley, who noted that becoming a superhero for a day is the most-granted wish by the Foundation. Make-A-Wish Philadelphia & Susquehanna Valley will be celebrated at Monday evening’s Kick-Off Concert featuring The Roots, Kool & the Gang, and Boyz II Men. The charity will also be among the recipients of a charitable donation from BIO in honor of this year’s Convention.

“We are extremely excited to be bringing the 2015 BIO International Convention back to Philadelphia,” said Jim Greenwood, President & CEO of BIO. “In addition to the economic benefits to the city, the BIO International Convention is a unique opportunity to showcase the region’s world class biotechnology ecosystem on a global stage. We also will be honoring the superheroes of our industry – the patients, the researchers and the entrepreneurs whose hard work and sacrifice make it possible for the biotechnology industry to heal, fuel and feed the world.”

In addition to recognizing the everyday biotech superhero, Greenwood also discussed the networking and educational opportunities available to BIO 2015 attendees. On the programming side, attendees will hear from legendary journalist Tom Brokaw and leading digital health expert Dr. Eric Topol.

To learn more about the event and available registration packages, please visit convention.bio.org/register.
More on This Topic