June 26, 2018
Biotech crops in the last 22 years have brought enormous benefits to the environment, health of humans and animals, and contributions to the improvement of socio economic conditions of farmers and the general public, according to a new report issued today by the International Service for the Acquisition of Agri-biotech Applications (ISAAA).

The ISAAA report shows the global biotech crop area increased in 2017 by 3 percent or 4.7 million hectares or 11.6 million acres; Global economic gains contributed by biotech crops in the last 21 years (1996-2016) have amounted to US $186.1 billion economic benefits to more than 16 to 17 million farmers, 95 percent of whom come from developing countries. 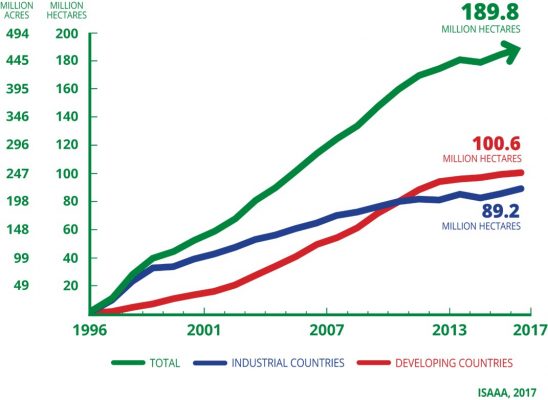 As more developing countries, now 19 in total including India, Pakistan, Brazil, Bolivia, Sudan, Mexico, Colombia, Vietnam, Honduras, and Bangladesh have increased their biotech crop area and continue to allow farmers to adopt biotechnology in food production, smallholder farmers see the direct improvements this offers, allowing them to provide better lives for themselves and their families. 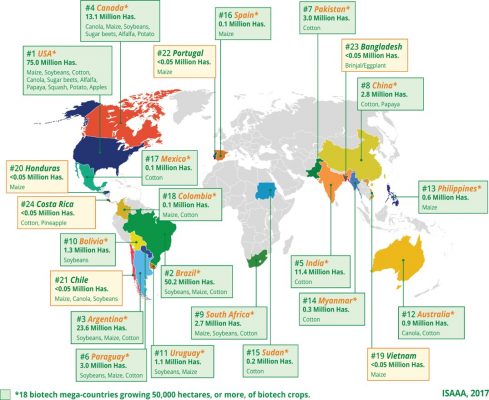 The ISAAA report was released in conjunction with a similar study by PG Economics, Ltd. Both studies highlight and quantify the continued social, environmental and economic benefits of the global adoption of biotechnology in agriculture.

From 1996-2016, PG Economics reported biotech crops provided $186.1 billion in economic gains to some 17 million farmers, many of whom are female, smallholder farmers solely responsible for the livelihood of their families and communities.

“Global food insecurity is a huge problem in developing countries, with around 108 million people in food crisis-affected countries still at risk or experiencing food insecurity,” said Graham Brookes, Director of PG Economics and co-author of the socio-economic and environmental impact paper. “We have seen for more than 20 years now how crop biotechnology adoption in developing countries has contributed to higher yields, more secure production, and increased incomes greatly contributing to decreasing poverty, hunger and malnutrition in some regions of the globe most prone to these challenges.”

The PG Economics study also shows great strides have already been made to reduce the footprint of agriculture and in mitigating and adapting to climate change. The latest study highlights how biotech use in agriculture continues to contribute to reducing greenhouse gas emissions. 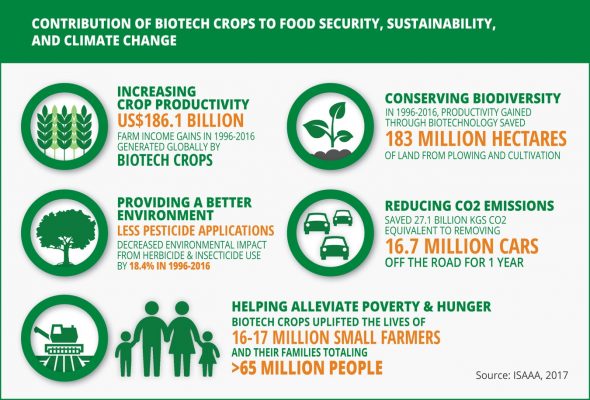 Highlights from the PG Economics report include:


Additional highlights from ISAAA’s 2017 report include:

The complementary studies – PG Economics’ “GM Crops: Global Socio-Economic and Environmental Impacts 1996-2016” and ISAAA’s “Global Status of Commercialized Biotech/GM Crops: 2017” – examine the continued widespread adoption of global crop biotechnology, and the significant positive socio-economic and environmental impacts of this adoption by farmers and communities around the globe.