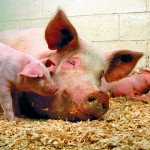 This study was authored by two veteran anti-biotech campaigners, Judy Carman and Howard Vlieger, and was published in an obscure online journal financed by the organic industry.  It reaches conclusions that are diametrically opposed to the great preponderance of the scientific evidence gathered from hundreds of independent food and feed safety studies that found no difference in between animals fed GMO or non-GMO diets.

While the first day news coverage bordered on alarmist, the scientific community has reviewed and analyzed the paper in the hours since and has concluded that this is more anti-biotech junk science.

Listed below is a brief summary of some of the more scientifically balanced coverage with links to the broader analysis.

Agronomist Andrew Kniss (Ph.D) of the University of Wyoming took the data (such as it is) in the Carman-Vlieger pig study and applied the usual statistical tools, and the differences between the different groups of pigs disappeared.

“If I were to have analyzed these data, using the statistical techniques that I was taught were appropriate for the type of data, I would have concluded there was no statistical difference in stomach inflammation between the pigs fed the two different diets. To analyze these data the way the authors did makes it seem like they’re trying to find a difference, where none really exist.”

[The thing to look at is the p-value. A relatively high p-value means the data result more from chance than from the factors being studied. You're looking for a p-value of 0.05 or less.  So the p-values of 0.5669 or even 0.2408 are sky-high and indicate that the implied hypothesis -- that GM grain is bad for pigs -- is not supported by the data.]

"The paper by Carman and colleagues avoids rigourous analysis of whether the differences are attributable to chance. In the study there is no clear-cut hypothesis about what component(s) of the diet is different and what affect the component might have specifically on the animal.

"Instead of a well formulated prior hypothesis the investigation consists of a survey of a fairly large number of parameters -18 are mentioned in one table, 17 in another, and there is no necessary statistical analysis to check for false discovery of effects because of repeated searching for differences.

"It's what some call a fishing expedition in search of a finding, and a known pitfall of animal feeding trials on whole foods…Using the standard criteria of a one in 20 chance that observed differences are randomly generated, about one or two apparent effects in this study might be a false discovery."

See “Pigs in the real world -- feed them different diets, measure many health parameters, some with show differences-- but what does it all mean?”

"Looking at the data there were no differences in any of the major variables evaluated by the study, such as weights, veterinary costs, illnesses, or mortality. No significant differences in blood biochemistry were found. At autopsy most organ weights were similar between groups. There was a statistically significant (but likely clinically-meaningless) increase (0.1kg vs 0.12kg) in uterus weights in the GM group. At pathology there were nonsignificant decreases in cardiac and liver abnormalities in the GM group (half as many), in stomach pathology there was one significant finding of more ‘severe inflammation’ (on a 4-point scale from no inflammation to severe) in the GM group. This is the finding that has been amplified as variably ‘damning’ or ‘concerning’ depending on which source is reporting."

See “Pollan and Bittman, the Morano and Milloy of GMO anti-science”

An analysis by the Science Media Centre found:

"The paper does not support the claim that GM crops cause stomach inflammation or increased uterus weight… it is let down by an inappropriate choice of statistical analysis methods."

UK science writer Mark Lynas says of the study:  "This is propaganda dressed up as science, which is why it didn’t make a proper peer-reviewed journal” and he also points out that the Journal of Organic Systems does not appear in PubMed, “suggesting it is not taken very seriously in the scientific community. It only publishes about twice a year, mostly with research touting the benefits of organic agriculture."