April 27, 2018
It’s hard to change your views when you are passionate about something, explains Devang Mehta for Massive. For scientists working on climate change, vaccines, evolution, and GMOs, this tendency of significant sections of the public to resist facts that run counter to their existing beliefs can be extremely frustrating.

This is why environmentalist Mark Lynas’ new book, Seeds of Science: Why we got it so wrong on GMOs, is such a welcome read:  it gives us a peek into the process of changing one’s dearly held opinions, from someone who did so very publicly. 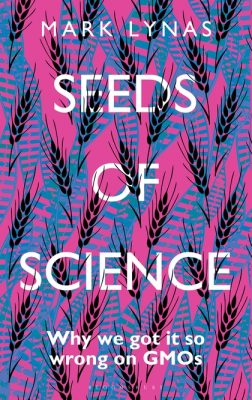 Lynas is perhaps most famous for getting up at the 2013 Oxford Farming Conference (an annual farming conference in the UK that first started in 1936) and giving a speech beginning, “For the record, here and upfront, I apologize for having spent several years ripping up GM crops… I now regret it completely.” Five years on, in his new book, Lynas walks us through this remarkable conversion with disarming, and sometimes brutal, honesty.

The book begins in 1999, with a post-midnight skulk around in a testing site of GM maize somewhere in eastern England. Lynas and a dozen other British activists, dressed in black and improbably armed with machetes and other “sharp tools,” are slashing the “living pollution” that is GM maize, when they’re rudely interrupted by the police.

Over the 250-odd pages that follow, Lynas introduces us to an eclectic cast of characters, including Vandana Shiva (the face of the anti-GMO movement), George Monbiot (the famed Guardian columnist, and an old anti-GMO comrade-in-arms), Paul Kingsnorth (a Man Booker long-listed novelist, who in the book, doubles as Lynas’ antithesis), Professor Marc Van Montagu (one of the inventors of GM technology), Dr. Leena Tripathi (a Kenyan scientist working on bananas), and Grace Rehema (a Tanzanian cassava farmer). He deftly uses his personal and professional relationships with these figures to narrate the story, first of how he came to repudiate his former allies and their beliefs, and then to describe his activities in the five years since.

As someone working in the field, I opened the book expecting to be bored by a repetition of often stale arguments and stories. After all, how much could Lynas really add in a debate that’s been raging for more than 30 years? Color me surprised!

Overall this is a book I wish could be found and read in every classroom and every university library. It’s an honest and thorough accounting of the science, issues, and emotions involved in the GMO debate, as well as the impact that perceptions of the technology in Europe have in poorer parts of the world. Mark Lynas accurately dissects the differences in thinking between scientists and activists that have stymied any agreement on GMOs for the last 20 years.

However, as I read the last, and possibly most anodyne, paragraph of Seeds of Science, I found myself, much like the author, caught between two worldviews, with more questions than answers about the future of GMOs  -  a technology that I’m still hoping reaches those who need it the most.
More on This Topic