A news conference followed by a panel discussion with local experts today released the first attempt to define the genomics part of the San Diego economy. Beyond identifying the local cluster, the researchers from the San Diego Regional EDC set out to define the U.S. industry.

Kirby Brady, director of research for EDC, introduced the challenge of creating a scorecard for something with no government codes and no previous criteria. Genomics has four areas surrounding it: biotech R&D, biomedical devices, health IT and pharmaceuticals. The team developed a score card to rank ecosystems in the top ten metropolitan areas in the country with a strong life sciences presence. The three categories, with criteria in each, were talent, innovation and growth. 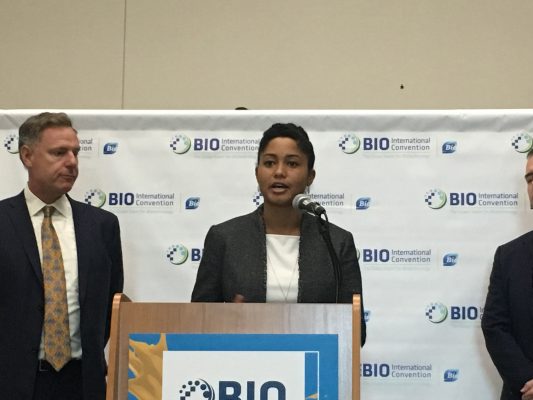 
For growth, San Diego grew 11 percent a year in the past five years and projections are for growth of 10 percent a year over the next five years. Mark McCafferty, president and CEO of EDC, said San Diego has another magic ingredient going for it beyond the strong technology ecosystem: a collaborative culture that sets the stage for future growth.

The culture has created a platform for powering the next generation of startups, McCafferty said. From being a leader in DNA sequencing technology, as evidenced by the growth of Illumina, the region is poised to create the future of precision medicine.

After Brady presented the EDC data, the panel discussed how San Diego was advancing toward becoming “the capital of genomics.” Behind the data is a story of how this once nascent technology is now shaping the future of global medicine and discovery and how it has altered the DNA of an entire region. San Diego has been able to attract top talent to the region and increasing interest from venture capital investors.

Van Rooyen said precision drugs in a decade or two will be targeted to an individual’s disease, not a disease population. When asked about a bottleneck to get there, he said the industry needs more data and machine learning to turn the data into something useful. Instead of a database of 1 million humans being sequenced, we need 1 billion. It will take 10 years and a lot of money, he said. Ren agreed and said we have little ability to read the growing abundance of data and make it meaningful.

The industry is advancing toward where health intelligence can predict health care risks and create personalized models of care. There will be regulatory challenges, she said, such as using machine learning and how that may be outside the practice of medicine

Another challenge is how to frame the industry and move in directions that can “bend and break” the high cost of health care, Van Zeeland said.

The panel agreed on the future of precision medicine and advancing toward “actionable items, which will include creating new individualized approaches to treating cancer, Alzheimer’s disease, orphan diseases and other genetically-based diseases.