No Tolerance for Eco-terrorism

September 1, 2011
Fred Perlak, Alan Gottlieb and Lorie Farrell wrote an article for the Growers for Biotechnology website in response to recent attacks on Hawaiian farms by anti-biotech activists.


All farmers have a right to choose the crop they want to grow and farming method they want to use - whether it's organic, conventional or genetically engineered. The same holds true for ranchers and other livestock producers. No food producer should be the target of violence for making a choice that others may not agree with.

Last week, three Hawaii island farmers were the victims of extreme vandalism. Not only did they lose papaya trees, but years of future income. Farmer Erlinda Bernardo said the earnings from her papayas were going to be used to send her two children to college. 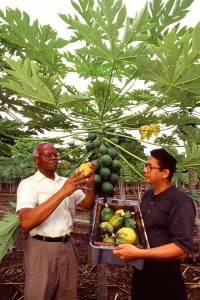 We had suspected that eco-terrorists might be behind these and other violent attacks on local papaya farms but were reluctant to believe that such extreme forces had made their way to our peaceful shores.

The Honolulu Star-Advertiser's suggestion that the destruction of these papaya farms - which were growing genetically modified papayas - was an act of agricultural terrorism (‘Papaya vandals must be stopped,’ July 21) was both disheartening and sobering.

Differences in opinion have surrounded genetically engineered papaya since it was widely adopted in 1998 by papaya farmers who had seen their crops destroyed years earlier by the papaya ringspot virus. Opposition to genetically engineered papaya has usually been in the form of angry letters to the editor or mild protests. In the last several years, however, the intensity of opposition has escalated to unacceptable levels.

In 2000, anti-biotech activists calling themselves ‘menehune’ wiped out a test plant plot of corn at a seed research facility on Kauai. A day later, the group destroyed several test crops of papaya, pineapple and flowers at the Kauai Agricultural Resource Center, which is operated by the University of Hawaii and the U.S. Department of Agriculture.

In May 2010, nearly 400 papaya trees were destroyed at a Mililani farm. A month later, more than 8,500 trees in Kapoho were chopped down, resulting in more than $100,000 in losses for farmer Laureto Julian. In all of the papaya destruction incidents, the fruit - much of it ready for harvest - was left behind.

Ranchers across the state continue to struggle with illegal poaching. Within the last 18 months, milking goats and cows have been stolen or slaughtered by intruders at dairy farms on Maui, Kauai and Hawaii island.

Although we cannot assume that these acts of violence were committed by the same group or individuals, or that the perpetrators were activists, it appears likely that many of them were fueled by the same extreme desire: to advance their narrow beliefs and encroach on the free will of those with whom they disagree.

The cases of papaya crop vandalism were violent, premeditated attacks - much more than just property damage. Regardless of their motive, we should not tolerate this kind of extreme behavior, which could grow more destructive and extend to other segments of agriculture or science if left unchecked.

Our law enforcement needs to conduct a deeper investigation into the incidents, and we want stricter penalties on attacks that resemble eco- or agricultural terrorism.

The issue of improving Hawaii's food sustainability by supporting more locally grown foods is a topic of huge discussion and effort statewide. Agricultural theft, vandalism and terrorism undermine efforts to encourage more local farmers to grow more local food. An attack on one farm is an attack on all farms, farmers and our entire agricultural community.

In addition to seeking enhanced civil and criminal penalties to discourage these acts of violence, our agricultural community has raised an additional $10,000 in reward money for information leading to the arrest and conviction of the individuals responsible for the destruction on Hawaii island.

We should not and cannot tolerate criminal acts. Let's do what is pono - support our farmers and ranchers, protect their right to choose, and let them produce their crops and livestock without fear of intimidation or destruction.”