After years of development, protest and regulatory red tape, the first genetically modified, non-browning apples will soon go on sale in the United States, reports Caitlin Dewey in the Washington Post:

The fruit, sold sliced and marketed under the brand Arctic Apple, could hit a cluster of Midwestern grocery stores as early as Feb. 1. The limited release is an early test run for the apple, which has been genetically modified to eliminate the browning that occurs when an apple is left out in the open air. 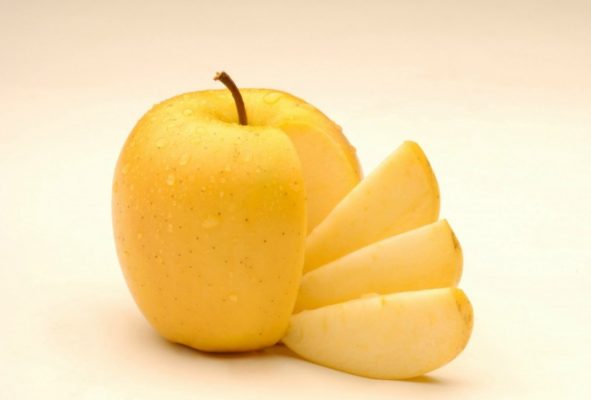 Critics and advocates of genetic engineering say that the apple could be a turning point in the nation’s polarizing debate over genetically modified organisms (GMOs). While genetic modifications have in the past been mainly defended as a way to protect crops, the Arctic Apple would be one of the first GMOs marketed directly to consumers as more convenient.

“What companies are desperate for is some really popular GMO product to hit the market,” said McKay Jenkins, the author of a forthcoming history of the debate. “Any successful product could lift the cloud over GMOs.”

Industry executives predict the apple could open a whole new trade in genetically engineered produce, potentially opening the market to pink pineapples, antioxidant-enriched tomatoes, and other food currently in development.

“We see this as less about genetic modification and more about convenience,” said Neal Carter, founder of Okanagan Specialty Fruits that makes the Arctic Apple. “I think consumers are very ready for apples that don’t go brown. Everyone can identify with that ‘yuck’ factor.”

Neal, a bioresource engineer and longtime apple- and cherry-grower in British Columbia, planted his first crop of non-browning Golden Delicious and Granny Smith apples in 2003. After nine years of testing, Neal and his wife Louisa petitioned the U.S. Department of Agriculture to deregulate the apples, which would allow them to sell into the U.S.

The greatest test is yet to come: whether the convenience of a non-browning apple is enough to convince consumers to look past GMO’s negative reputation.

“I don’t know what their chances are – it’s a very polarized debate,” said Michael White, an assistant professor of genetics at the Washington University School of Medicine. “But I think this is huge. What the Arctic Apple is doing, trying to push GMOs on their own merits, could lead to a more positive discussion.”

But the Arctic Apple has a distinct advantage over its predecessors: It’s being sold sliced in 10-oz bags as a convenience snack food. The Carters say they’re imitating the baby carrot model, which has proven a success for vegetable growers, helping to catapult sales of the vegetable. Pre-sliced apples, currently treated with chemicals to prevent browning, enjoy a similar popularity in school cafeterias and Happy Meals.

“We might eventually sell them to distributors for service in schools,” Carter said. “We thought our initial go-to-market strategy would be through food service. But a significant number of retailers reached out, and we realized – they’re ready for us.”

The February trial-run is part of that public relations campaign; Okanagan wants to “validate our messaging and go-to-market strategy” before launching commercially in the fall, Carter said. The apples will be available at 10 locations of “a few” regional Midwestern grocery chains, which Carter declined to name, where employees will be on hand to poll customers about their first impressions.

The success of the Arctic Apple could embolden the creators of other consumer-directed GMOs currently waiting in the wings.

The Food and Drug Administration recently approved an engineered pink pineapple containing the pigment lycopene, which has been found to reduce the risk of cancer and heart disease in consumers who eat tomatoes. In the U.K., researchers have developed a purple tomato that contains extra antioxidants. And many of America’s major agrochemical firms, including DuPont Pioneer and Monsanto, have indicated a desire to introduce GMOs with marketable consumer benefits, if consumers seem ready to accept them.