Only 12% of Public Biotechs are Profitable

May 16, 2013
Of the 286 biotech companies trading on public exchanges today, 241 focus on drug development, a slight drop in numbers from last year.* Of these 241 in the biopharmaceutical space, only 28 (12%) had both a product on the market and positive net income for FY 2012. This is about the same as the 13% reported last year, but different companies populate the list.  Unlike our last report (May 2012), when acquisitions of profitable companies had an impact on the numbers, the more recent buy-outs were mainly of pre-profit companies. However, this year we saw a few companies removed from the list due to a need to increase SG&A or R&D lines to support new marketing efforts or Phase III trials. For example, mid caps Regeneron and Vertex dipped into the red for 2012 net income. 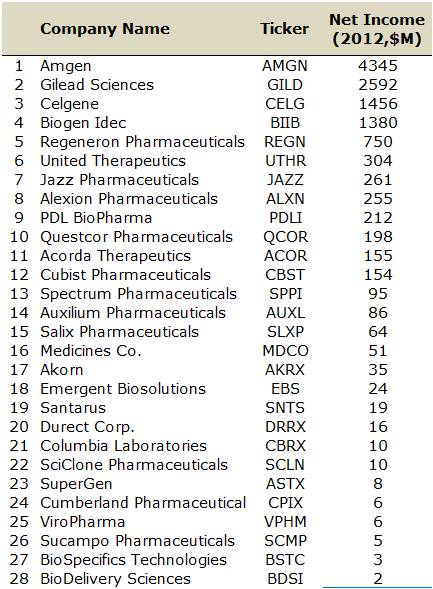 The table above lists the 28 profitable companies. Just like last year, four companies reported over $1 billion in net income. Eight companies had between $100M-$1B in net income. 57% of those in the green had less than $100M in net income. To look at this another way, only 12/241 companies make over $100M – only 5%.**

*The slight drop in the total number of public companies from last year means that bankruptcy and acquisitions have outpaced the 22 IPOs we had since Jan 2012.