June 21, 2017
Day three of the BIO International Convention brought some heavy hitters to the stage. From Ann Romney’s remarkable and courageous advocacy for patients to many of our industry’s leading innovators discussing the complex ecosystem surrounding drug pricing.

Another remarkable panel took a deep dive on the effect of Trump’s America First rhetoric and actions and how it’s affecting the global biotechnology industry.

Not surprisingly, the North American Free Trade Agreement (NAFTA) was a central topic and Karen Antebi, Economic Counselor for the Embassy of Mexico’s Trade & NAFTA Office, delivered her country’s perspective on the enduring value of the historic trade agreement.

Antebi conceded NAFTA has been very good for Mexico, but the US has also seen an enormous economic benefit. By her calculation, forty percent of Mexico's global exports can be traced to have included U.S. labor. That is to say, the two nation’s global exports are highly intertwined.

Fellow panelist Dr. Derek Scissors shifted his focus from South to East by dialing in on how Trump can improve trade with China so that it works better for America. Calling China the “world’s greatest IP thief,” Dr. Scissors estimated the theft, while difficult to accurately track, is probably in the tens of billions of dollars annually. To combat this massive issue, he recommends holding responsible companies that willingly receive stolen IP. By instituting tougher sanctions, companies will be forced to confront their risk calculations – and hopefully adhere to the law.

Panelist Rich Bagger currently leads Corporate Affairs and Market Access at Celgene but also was a key player of Trump’s transition team. He agreed that NAFTA should remain, but must be updated to accommodate modern realities affecting the biologics industry, namely the need for provisions on regulatory data protection for biologics. 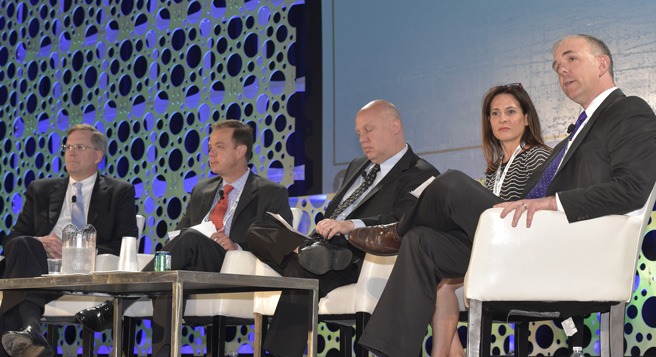