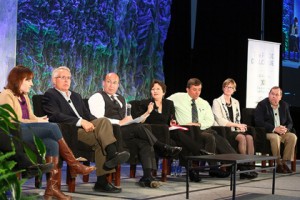 People have many questions about how their food is grown and raised, and GMOs are often at the top of that list. The issue has become a regular media headline and more than a tweet per minute goes out about GMOs, so there is certainly a wealth of info available. Panelists talked about whether or not consumers are getting the right answers to their questions though.

Emily Anthes talked about the deluge of coverage that will focus on a single study that comes out on the topic and says that we need more than that. Once the dust settles, she says, reporting drops off when this is a much larger, more nuanced issue that needs to be looked at and further reported on. Melinda Hemmelgarn talked about how we've been wired to take in short bites of information yet this isn't a story that can be told like that – it needs more analysis.

Jerry Slocum said that as a farmer who has seen the benefits of biotech in ag firsthand, he would appreciate more of a balance in the coverage of GMOs. Emily followed that up saying that balance can't just tell each side of the story evenly, but needs to focus on the science and reporting the info that is backed up with facts, data and research. A common myth is that no independent research has been conducted on GMOs and their safety, but the fact is, she says, hundreds of studies have been conducted and close to 200 have been conducted by independent organziations.

This led to a discussion on the role of media in educating consumers on GMOs. The consensus was that media plays an important role and needs to focus on reporting science-based facts and research, but it also comes down to science education. Jerry referenced a study that showed more than 50 percent of people didn't think a regular tomato could even contain genes, so how then can we expect people to understand this, he said.

The discussion turned to labeling and Mike Olson asked why if there was nothing to hide, does industry not want to label these products. Dr. Goldberg addressed the fact that many of the labeling efforts to date were more about creating fear in consumers and driving home anti-technology messages rather than being focused on informing the consumer.

While the panelists didn't agree on everything one thing they did all believe was that this dialogue was important and we need more open discussions like this. Farmer Pam Johnson added that the dialogue can't be based on fear, it needs to be based on science. "There is room in this country for every sort of farmer, every size of farmer, every sort of farm – organic, conventional and GMO. We need them all so we can feed the world," she said.
More on This Topic