July 17, 2014
If phonetics were the only driver, BRIC would be CRIB. But life sciences drug-related deal-making and partnering growth in Brazil and the rest of Latin America provide good reason to put the “B” in front. Traditional partnerships (i.e. excluding M&A and early venture funding) where a Latin American company served as the ‘seller’ or ‘out-licensor’ doubled per year from 2009/2010 to 2012. While there was a pullback in 2013, overall growth from 2009/2010 to 2013 has been impressive with 40% more deals being born. The fastest growing segment of these deals is commercial licensing, which was immune to the mild 2013 pullback. Manufacturing & Supply deals, the second fastest grower in this segment through 2012, slowed a bit in 2013. Perhaps surprisingly, partnerships Latin American companies struck with foreign ‘buyers’ to co-develop assets and commercially license them in the region has grown steadily. 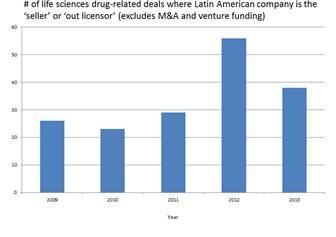 Who’s buying from Latin America anyway? Most of the companies are US companies, as you may have guessed. Latin America itself is in second place, with Brazilian companies looking regionally for collaborations. In third place are Spanish (i.e. from Spain) companies. 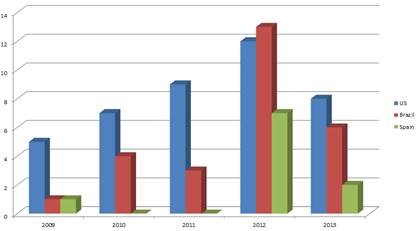 The question of therapeutic area is more difficult, since some deals are indication neutral. However the popularity infectious disease-related deals enjoyed in 2009 has been replaced with a rise in oncology-related partnerships in Latin America.

In summary, South and Central America present a variety of unique opportunities for biotech collaborations and partnerships. The BIO Latin America partnering conference upcoming in Rio de Janeiro September 9 through 11 is a great opportunity to connect with your next partner in Latin America! Stay tuned for further posts on venture funding, tech transfer trends and a review of interesting but recent deals in Latin America.


Data for this post derived from Thomson Reuters Cortellis