October 17, 2014
The number of new patent cases filed in federal court has dropped by an astonishing 40 percent as compared to this time last year. This trend has some questioning whether Congressional patent reform is even necessary.

Some legal experts are attributing this drop to the fallout from the U.S. Supreme Court’s recent Alice vs. CLS Bank decision.

In June, SCOTUS ruled in the case of Alice that certain subject matter which had been patentable (a computer-implemented business method), must now be considered invalid because it was too broadly based on “abstract ideas.”  Since then, similar patents have been struck down in quick succession in the lower courts.

According to patent scholar Dennis Crouch, the Alice decision is just one in a series of recent SCOTUS decisions that have caused hundreds of thousands of issued patents to become invalid. This lack of confidence may now be starting to show up in patent lawsuit statistics. 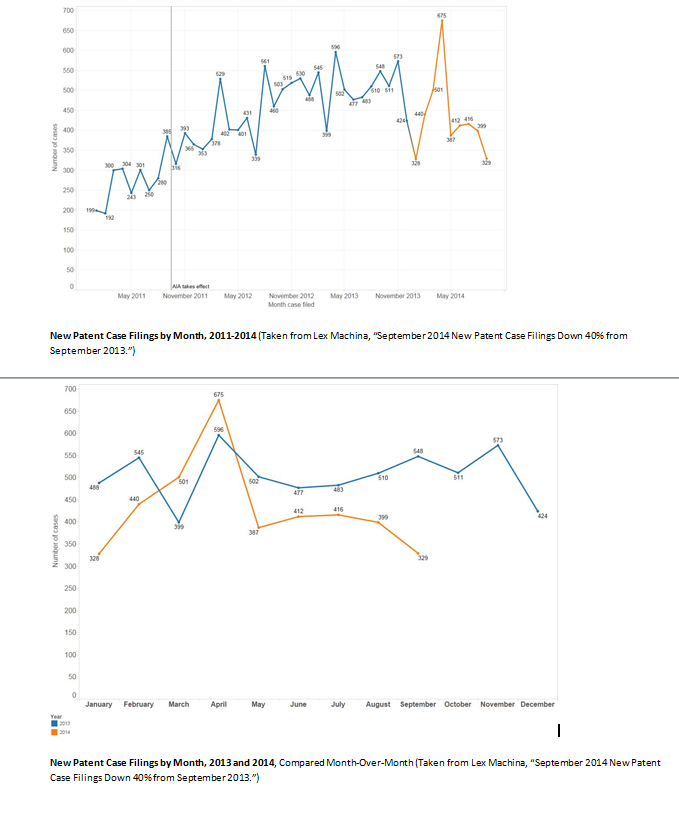 Looking at the figures above, there appears to be a strong correlation between the drop in patent case filings and the Alice decision. Yet this is by no means definitive. Given the short period of time since the case, the amount of data available does not yet prove a statistically significant trend.

Additionally, there are other factors working in favor of accused patent infringers. In Nautilus v. Biosig Instruments the Court tightened restrictions on patent applicants by narrowing the scope of inventions being claimed. In Octane Fitness v. Icon Health, the Court made it easier for courts to make the loser pay for all attorney costs.  And in Akamai v. Limelight, the Court made it much harder to sue e-commerce companies for infringing patented processes involving electronic transactions between multiple parties.

What is certain is that patent litigation is dropping. Patent experts believe that investors are growing more cautious about financing patent litigation. The risk of losing based on an ineligible claim, and spending a significant amount doing so, has gotten substantially higher.

Patent holders will have to carefully evaluate how to proceed and if the cost of going to trial is worth the risk of losing a patent battle in a post-Alice courtroom.
More on This Topic