Patents in the U.S. Supreme Court

June 29, 2011
A special session at the 2011 BIO International Convention takes a fascinating look at the underlying factors involved in the U.S. Supreme Court hearing patent cases. The Supreme Court has been accepting patent cases at a higher rate than ever before, with three major patent appeals reviewed this past term alone.  And the Court seems poised to accept several more in the coming year. 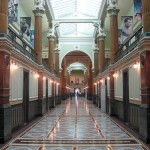 According to the session moderator, Chief Judge (Ret.) Paul Michel from the U.S. Court of Appeals for the Federal Circuit, the current Supreme Court seems to be “text focused,” looking at the wording of the law and leery of formulas created by lower courts. Because patent law is very general, this tendency can lead the Supreme Court to blur formerly bright lines in its rulings. The biotechnology industry, with its unique reliance on patent rights, is particularly well-advised to closely observe the Supreme Court’s activity in the patent space.

The session revealed that the pending patent reform bill, which is more specific than its 1952 predecessor and is designed to enhance patent efficiency and objectivity, may be helpful for the Court to make future rulings. The panel concluded that the Supreme Court is likely to remain very involved in hearing such cases in the future because patent cases are central to the modern economy.
More on This Topic