October 13, 2011
Of the 300 publicly traded U.S. biotechs, 219 (73%) are developing drugs. The other 27% are working on molecular tools, diagnostics, biofuels, and other biotech endeavors. One question that is often asked with respect to drug-focused biotechs is: How big are they compared to traditional pharmaceutical companies? How many are valued as small start-ups vs large, or mid-size pharmas?

It turns out that more than half the sector trades with a market valuation of less than $200M, and a third trades for under $100M. So the sector today is predominantly composed of Small and Micro Cap stocks. In fact, even the Nasdaq Biotech Index, which excludes many Micro and Nano-cap stocks and biases weightings toward larger companies, trades in high correlation with the Russell 2000 Small Cap index. In Chart 1 below, we place the number of companies into buckets by market capitalization. Only five companies actually land in the “Large” bucket, as defined by $10B+ in market value (Amgen, Gilead, Celgene, Biogen Idec, Vertex). This compares with 142 of the 219 companies (65%) trading in the Micro Cap ($50-$300M) and Nano Cap (below $50M) range.


Chart 1. Most Biotechs are Tiny 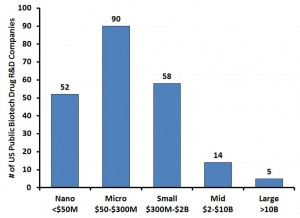 In Chart 2, we sum the market caps of each of these five buckets and compare them with market caps of the three largest pharmaceutical companies (JNJ, Novartis, and Pfizer). It turns out that when we add all the large biotechs together, the total valuation does not even equal one of these "Big Pharma" companies. More interestingly, if you add up all the remaining 98% of biotechs (214 companies), they do not even equal one Pfizer in value. The combined market value of any two of these Big Pharmas (JNJ + Pfizer = $345B, for example) is larger than the total public biotech sector, which today stands at $258B for all 219 biotechs put together.


Chart 2. Added together, Biotech is almost a Big Pharma. 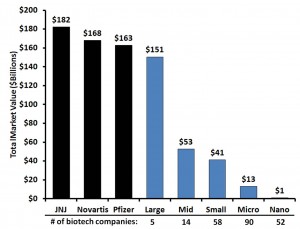 To put this in perspective, (mainly for M&A theorists), we examined the cash position at top large pharmaceutical companies, and asked the question: How much of the entire biotech universe could Big Pharma acquire with current cash positions? It turns out that the top 10 Pharma firms (by cash position) have enough cash to buy 98% of all publicly traded, drug-focused R&D biotech companies in the United States (Chart 3). By applying a more realistic 50% premium to current market values, these Big Pharmas could acquire 93% of the sector. A single company like JNJ, with more than $29B in cash, could acquire well over 50% of all biotech firms, at a 50% premium, and still have cash left over to finance operations (Chart 4). In fact, the bottom 50% (110 biotech companies) costs just $1.2B per year to run, based on summing the last twelve months of operating cash flow expenditures. This compares to JNJ’s $15B positive operating cash flow and $6.8B annual R&D expense. 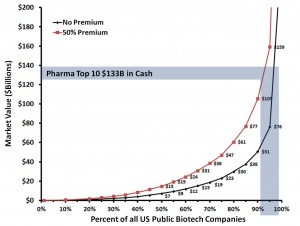 Chart 4. What JNJ, Pfizer and others could buy. (Cash from 2Q11 is in parentheses) 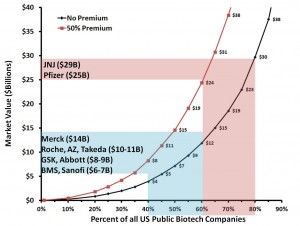 The strong cash positions of Big Pharma vs. the relative size of biotechs has baffled M&A theorists predicting a major strategic wave of biotech takeovers is bound to come. That wave has yet to come, even with Pharma’s ability to issue debt at record low interest rates and continued pressure to refill and diversify pipelines. What has happened so far is a slow trickle of acquisitions, many in the private sector, and a couple of large deals in the public sector. Will 2012 be the big M&A year for Wall Street’s biotechs or will drug companies prefer to shell out higher dividends? Either way, I am sure the seers on our Closing Panel at the Investor Forum October 26th will tell us.