June 26, 2013
With summer driving season here, a new public opinion poll commissioned by Fuels America gauges the consumer impacts of constantly fluctuating gas prices and reveals that Americans believe renewable fuel is the solution. The survey, conducted by Research Now, identified specific budget items families have to give up when faced with high gas prices. It also recorded their opinions of oil, renewable fuel and the impacts both have on the economy and our environment. 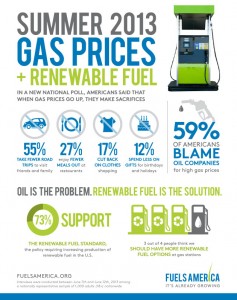 Americans continue to believe the nation should be using more renewable fuel (80 percent) and support the one policy, the Renewable Fuel Standard (RFS), that is making that happen (73 percent).

Four of the top five things consumers give up when faced with high gas prices are family activities, highlighting the difficult choices that American’s face as a result of high and volatile oil prices:

As consumers make these tough choices, it is also clear who is at fault: 59 percent of Americans blame the oil industry for high gas prices.

The poll parsed out the opinions of environmentalists on these issues as well. Overall, self-identified environmentalists were even more critical of oil and supportive of renewable fuel than respondents at-large:

“From the economic damages of extreme weather fueled by climate change to the high costs of water and air pollution when petroleum is spilled or burned, we are paying the price every day for our reliance on oil. Alternatives like renewable fuel offer consumers a choice, bringing down prices for individuals and businesses and ensuring all of us a cleaner, more sustainable future,” according to Vice Admiral Dennis V. McGinn (USN, ret.), President and CEO of the American Council on Renewable Energy.

The poll also identified respondents who live in military households, the majority of whom were supportive of renewable fuel in general:

“With 93 percent of the U.S. transportation sector dependent on oil, America is woefully susceptible to global price spikes and international security threats,” said Andrew Holland, Senior Fellow at the American Security Project. “Even if we produced all our oil here at home, in a global market the price is still set by the latest unrest in the Persian Gulf. We should instead encourage competition in how we fuel our nation. Biofuels can ensure a steady supply of clean, domestically-produced renewable fuel as an alternative to oil. This is key to keeping Americans safe and prosperous in the 21st Century.”

Bi-partisan support for renewable fuel and the RFS

While there is a heated debate in Washington over the RFS, Liberals (83 percent), Moderates (76 percent), and Conservatives (60 percent) all support the RFS.

“Republicans and Democrats alike can agree that low energy prices and domestic jobs are good for America,” said Brent Erickson, Executive Vice President, Biotechnology Industry Organization (BIO). “It’s clear that folks of every political stripe support the renewable fuel industry for the 365,000 jobs it provides and the $1,200 it saves American households on their gas bill every year. Growing sustainable, domestic fuel that brings down gas prices is a win-win-win.”

The poll’s findings demonstrate that the vast majority of Americans are seriously impacted by high gas prices, blame oil companies for that situation, and support renewable fuel and the only policy supporting the growth of renewable fuel in the U.S. – the RFS.
More on This Topic