September 23, 2011
On Sept. 14, the House Agriculture Subcommittee on Livestock, Dairy, and Poultry held a public hearing to examine the issue of feed availability and its effect on the livestock, dairy, and poultry industries. Members of the subcommittee heard testimony from animal producers and their industry associations, who as a group called for an end to the Renewable Fuel Standard and other biofuel support policies or at minimum a suspension of the RFS if corn supplies are short in any given year. No grain growers, biofuel producers, or biotechnology companies were invited to give testimony, so Congressmembers heard only the poultry and beef story.

The Subcommittee’s Ranking Member Dennis Cardoza (D-Calif.) summed up the hearing by saying, “Prices have skyrocketed recently, especially harming [California’s] dairy, livestock, and poultry producers. It is time for Congress to stop picking winners and losers, which is causing a shortage of feed in our country.”

The testimony presented by the animal producers contained some statements that should be clarified for Congressmembers.

Foremost among the concerns presented by the animal producers is that ending stocks for corn have fallen to “unprecedented lows,” to cite the testimony of Dr. Steven Roger Meyer of Paragon Economics, an agriculture economist who represented the National Cattlemen’s Beef Association at the hearing. The unprecedented low he is referring to is in the stocks-to-use ratio, or the percentage of total grain held as stock at the end of the year. But, since overall supply and use have increased, the ratio has changed, as shown in the graph below. The total amount of stock in millions of bushels at the end of 2010 and 2011, while below average, was not at historic lows. 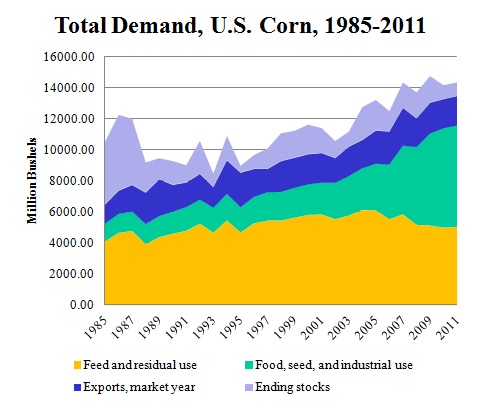 Dr. Meyer also claims that the tax credits for alcohol fuels and tariff on imported ethanol (which are scheduled to expire at the end of 2011) and the Renewable Fuel Standard have caused “lower per capita meat and poultry output.” Production of grain fed animals has changed very little over the past 25 years, as shown in the graph below, and has continued to increase since 2007. But of course, U.S. population has grown faster, so of course there is lower per capita production.

Dr. Meyer recognizes, where other speakers at the hearing did not, that DDGs left-over from ethanol production have replaced much (though not all) of the corn used for animal feed. But he, like others, fails to mention the changing nature of the diet of grain-fed animals. Feeding of any raw grain has declined, while feeding of mill byproducts – such as oilseed meal – has increased since 1985, as shown in the graph below (the graph does not include DDGs). That trend should be expected to continue as new, higher value uses of grains and oils come to the marketplace.

There are additional points that could be corrected. For instance, the gasoline oxygenate MTBE was never banned at the federal level, though it was in California and New York. Ethanol was favored because the industry faced multiple lawsuits over continued use of MTBE. And other agricultural economists – such as Bruce Babcock of the Center for Agricultural and Rural Development – have argued that the ethanol industry would have grown and outcompeted animal producers for corn stocks even without subsidies, as oil prices climbed in recent years.

In fact, the higher value for corn in recent years has helped corn farmers reverse a decade-long string of net losses, as shown below. Corn farmers are definitely more optimistic about the coming year than animal producers, according to the DTN/The Progressive Farmer Agriculture Confidence Index.