For Preventing Hunger, Biotechnology is Key

December 13, 2011
The journal Nature recently published an article authored by Calestous Juma, director of the Agricultural Innovation in Africa Project at the Harvard Kennedy School.

To survive the droughts, wars and other major causes of famine, Africa must embrace technologies that enable it to produce more, better food with less effort. 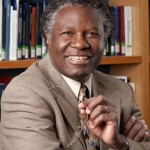 Indeed, without the advances in molecular biology and other scientific fields that occurred in the second half of the twentieth century, African nations would be much worse off than they are now. Without this Green Revolution, which enabled developing nations to import cheaper grains and grow high-yield seed varieties, analysts estimate that crop yields in developing countries would have been 23.5 percent lower and prices between 35 percent and 66 percent higher in 2000.

Caloric intake would have dropped by up to 14.4 percent, and the proportion of malnourished children would have increased by nearly 8 percent. Put another way, the Green Revolution helped to raise the nutritional status of up to 42 million preschool children in developing countries.

These tools were a great help to African nations in the previous century, but they are not sufficient to help Africa's agriculture survive what is coming: rising population and loss of productivity brought on by ecological disruptions such as environmental degradation and frequent droughts.

To weather these changes, African nations must be open to new biotechnology tools that allow farmers to grow crops that have even higher yields and a higher nutritional content, and which can withstand biological and physical stresses.


At present, only a few African countries are allowed to grow genetically modified (GM) crops, partly because of restrictive national biosafety policies that impose excessive regulatory barriers to the adoption of agricultural biotechnology. This must change.