March 8, 2013
About eight in 10 psoriasis patients who use health care social networks say they do so primarily to learn how others manage their disease, and get practical tips and advice they couldn’t find elsewhere, according to a survey conducted by the National Psoriasis Foundation, Manhattan Research and Inspire, a company that builds and manages online patient communities. 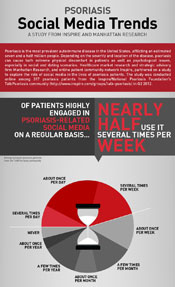 The millions of people with psoriasis, including the one million visitors to TalkPsoriasis in 2012, are not alone in their use of social media for health. A 2011 Pew Research Center study found that one in four Internet users living with a chronic ailment have gone online to find others with similar health concerns.

Psoriasis is a chronic, genetic disease of the immune system that causes the skin to crack, itch and bleed, affecting roughly 7.5 million Americans. It is the most common autoimmune disease in the country.

“Psoriasis is a serious disease that impacts the individual physically, socially, financially and psychologically. The more that people with psoriasis are able to connect with others and find support and information through platforms like social media, the less isolating the disease can be,” said Catie Coman, vice president of marketing and communication for the National Psoriasis Foundation.

“Members of TalkPsoriasis in Inspire tend to be younger than those in some other disease areas in Inspire, and they regularly discuss treatments for psoriasis and psoriatic arthritis,” said Brian Loew, CEO of Inspire. “These members exchange detailed personal experiences. They work with their physicians and incorporate what they learn from their peers to actively evaluate and make decisions about their treatments.”

Other findings from the study reveal that:

Learn more about psoriasis at www.psoriasis.org.

John Novack is communications director of Inspire, a Princeton, NJ-based company that builds and manages online support communities for patients and caregivers, and helps connect patients to researchers.
More on This Topic