Raising the Stakes in Biotech

August 11, 2011
Small biotech companies continue to struggle to obtain funding as capital markets remain tight. The S&P downgrade may create even tighter credit markets and raise the cost of available credit, for small and large companies. To the extent that the downgrade leads capital flows out of the U.S., that hurts biotech.

Biotech’s contributions to the world are critically needed. Our industry holds great promise for curing and treating many prevalent diseases, such as Alzheimer’s, cancer, diabetes and Parkinson’s. Biotech can help to make the U.S. healthcare system more affordable, efficient, and of higher quality and foster the development of breakthrough technologies to provide alternative energy sources, combat hunger and protect against bio-terrorism.

Based on a recent survey of 800 registered voters, the majority of those surveyed place a high value on the industry’s contributions. Even in these fiscally focused times, finding cures to serious diseases ranks in the top tier of issues that matter to Americans. 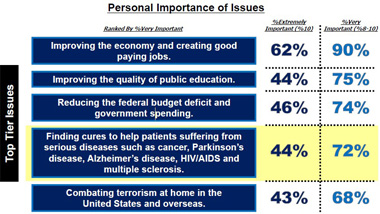 In addition, continued funding for biotech research receives majority support in a second tier of priorities, far outpacing other areas of federal spending based on survey responses.