July 3, 2013
According to a new report from EvaluatePharma, global pharmaceutical R&D had negative growth in 2012 and is expected to only grow at a snail’s pace over the next five years. As seen in the chart below, industry spending on R&D actually started contracting in 2009 and has been on a new, slower trajectory ever since. 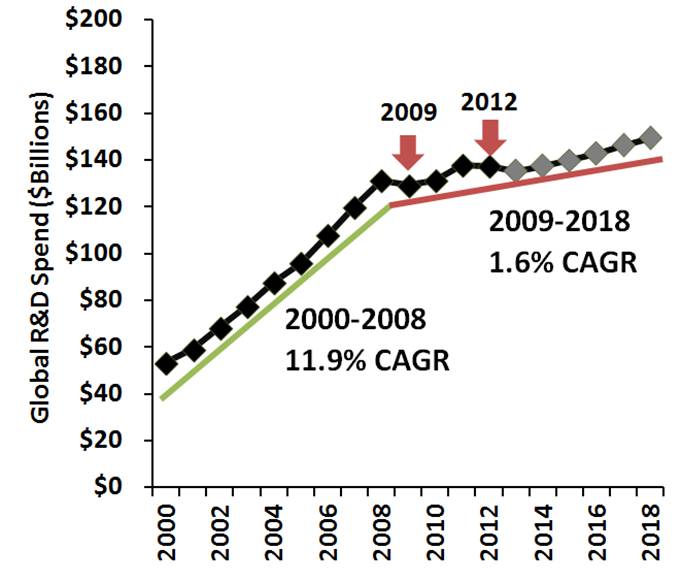 Recent sales growth has also slowed, and this has a direct effect on R&D expense. Back in 2004, total R&D was 19% of global sales. In 2012, it was also 19%. If sales levels flatten or go down (as they did in 2012), so will R&D if the percentage is fixed. This relationship, and the effect of currency rate fluctuations, might explain the R&D dip in 2012.

If this is accurate, it might suggest that there is a pullback coming in the percentage of revenue allocated to R&D.  Based on our separate analysis of 10K data for 2008-2012, the top 10 drug firms have already downshifted R&D from an average of 14.7% to 13.6% of revenue.

Predicting the future is always difficult and other explanations might exist. Perhaps forward projections for sales are more variable than expected R&D forecasting, or maybe not updated as frequently, etc., adding difficulty to comparing future ratios. Nevertheless, it is something to keep an eye on.

(The full report from EvaluatePharma can be downloaded free here.)
More on This Topic