January 28, 2015
The International Service for the Acquisition of Agri-Biotech Applications (ISAAA) released its report today on the current global plantings of GM Crops.  The report, Global Status of Commercialized Biotech/GM Crops: 2015, highlights the accumulated hectarage of biotech crops grown in 2014 as well as the key benefits of biotechnology, including alleviation of poverty and hunger by boosting the income of risk-averse small, resource-poor farmers around the world.

According to the report, the United States continued as the lead country with 73.1 million 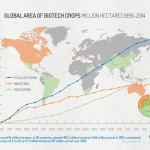 Lastly, India and Canada both recorded 11.6 million hectares. India had an adoption rate of 95 percent for biotech cotton. Canola and soybean hectares increased significantly in Canada.

Further the report highlights many benefits offered by biotech crops. A global meta-analysis of 147 studies in the last 20 years, confirmed that “on average GM technology adoption has reduced chemical pesticide use by 37%, increased crop yields by 22%, and increased farmer profits by 68%.” These findings 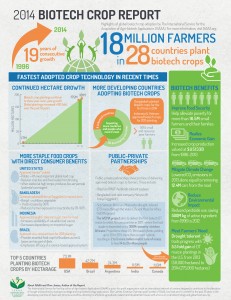 corroborate earlier and consistent results from other annual global studies.

The latest provisional data for 1996 to 2013, showed that biotech crops contributed to Food Security, Sustainability and Environment/Climate Change by: increasing crop production valued at US$133 billion; providing a better environment, by saving ~500 million kg a.i. of pesticides from 1996 to 2012; in 2013 alone reducing CO2 emissions by 28 billion kg, equivalent to taking 12.4 million cars off the road for one year; conserving biodiversity by saving 132 million hectares of land from 1996-2013; and helped alleviate poverty for >16.5 million small farmers and their families totaling >65 million people, who are some of the poorest people in the world.


"The growth, diversity and benefits of biotech crops continue to evolve and they can make a significant contribution to feeding a growing population. As the fastest adopted crop technology in recent times, biotech crops are part of the solution to food security and climate change – very real problems both consumers and farmers face around the world. Whereas biotech crops are essential for global food security, they are not a panacea. Adherence to good farming practices such as rotations and resistance management are a must for biotech crops, just as they are for conventional crops."

ISAAA concluded that modest annual gains are expected in the coming years due to the already high rates of adoption (90% to 100%) in the current principal biotech crops, leaving little room for expansion in mature markets in both developing and industrial countries. The pipeline is full of new biotech crop products which could (subject to regulatory approval for planting and import) be available during the next 5 years or so ‒ a list of over 70 potential products.  They include, a broad range of new crops and traits as well as products with multiple modes of resistance to pests/diseases and tolerance to herbicides; Golden Rice is progressing with field testing and late-blight resistant potatoes are being field tested in Bangladesh, Indonesia, and India. In the US, Simplot has already requested approval for an enhanced Innate™ potato with late-blight resistance and lowered reducing sugars; pro-poor crops, particularly in Africa, such as fortified bananas and pest resistant cowpea.


"Through continuous research, development, acceptance and adoption, biotech crops have and will continue to address consumer concerns and needs ranging from nutritional value to aesthetic factors that impact purchasing decisions and address the problem of food waste."