The Return of the Biotech IPO

August 5, 2013
It isn’t just the volume of IPOs this summer that makes this window a victory for hibernating private biotechs and their VC backers, it’s the details of the offerings in terms of price, performance, and type of biotech making the leap onto the public stage. For the last five years we have not seen average offering prices land above expectations, but 2013 is breaking that trend. Price performance is also impressive, with a number of IPOs hovering near 2x the offering price. Rounding out these two positives for valuation is the return of the formerly taboo Phase I and Pre-Clinical IPOs – a qualitative signal of strength. 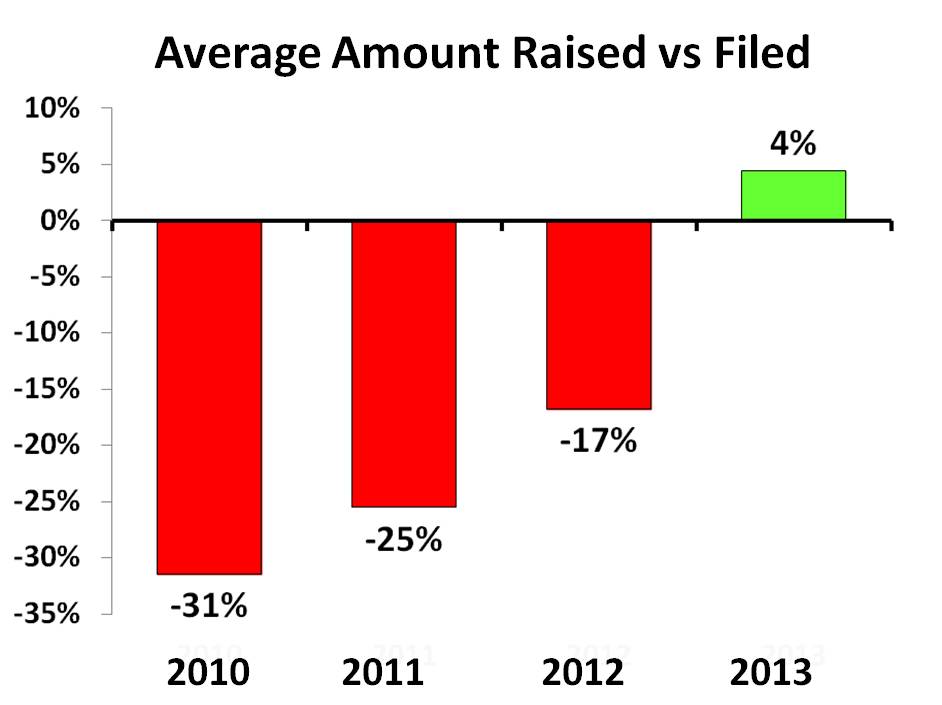 The above chart shows that the average pricing for the 23 US based IPOs (as of August 1st, 2013) is 4% above the S-1 price range. The trend has been creeping up from years back, when it was a dismal -31% below the asking price. 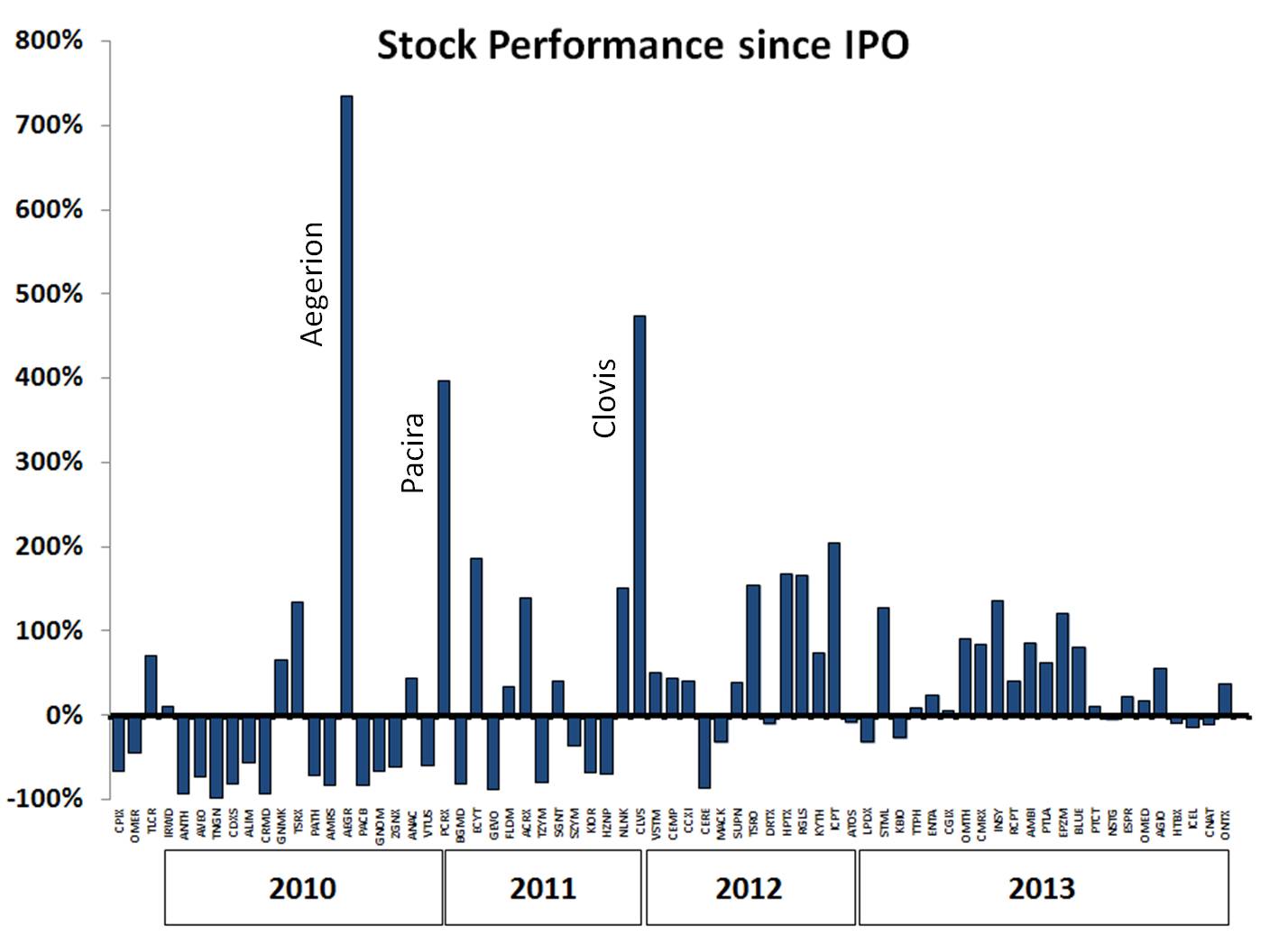 Performance has been about as good as it gets. The second chart (above) shows the price performance since date of IPO for all US based IPOs since 2009. In 2013 so far, 18 of the 23 IPOs are above water. In contrast, we still do not see half the class of 2010 or 2011 in positive territory, and they have had 2-3 years to make strides in a period where the index (NBI) has doubled. (Of course, it is notable that a few of these seasoned IPO names have had standout performance vs their classmates: Aegerion (AEGR) is up over 700%, Clovis (CLVS) and Pacira (PCRX) are up over 400%.) In contrast to earlier years, the class of 2013, with many IPOs only 1-2 months out of the starting gate, has 17 of 23 companies  sporting positive returns, 11 of those gaining over 50%. 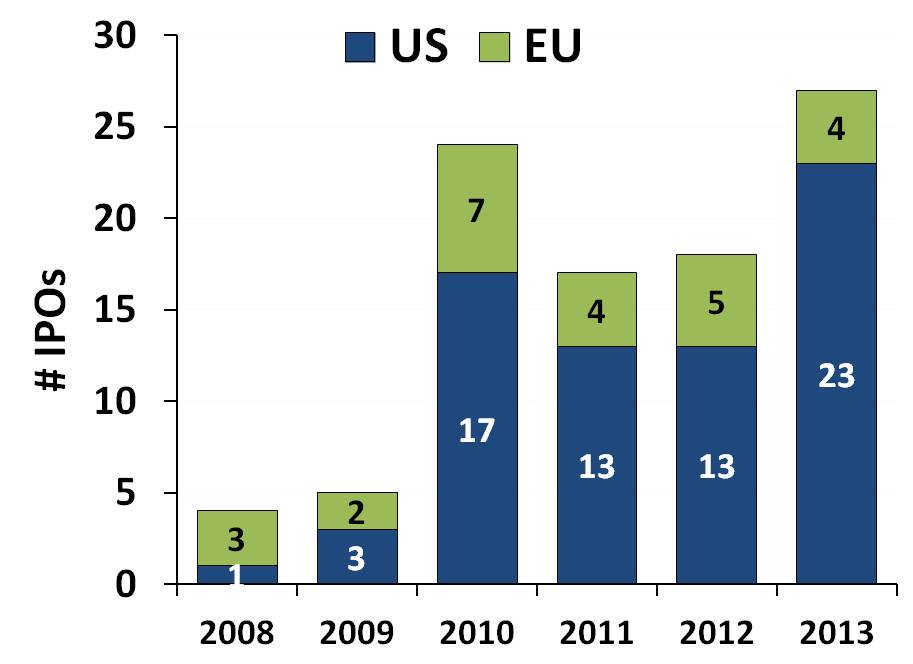 With 23 US-based biotech companies in 2013, the sector is now ahead of any year since 2007. The European-based biotechs (including companies based in Israel) continue to knock out a few IPOs per year, with four in 2013 so far. Two of these listed on the US NASDAQ exchange, Prosensa (RNA, Amsterdam) and Alcobra (ADHD, Israel). The US listed foreign companies are far out-performing the IPOs listed on European exchanges. 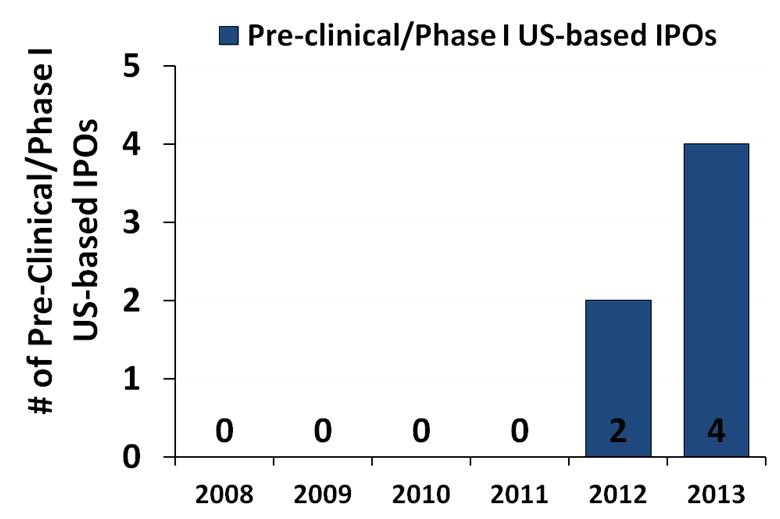 Looking at phase of development and the types of biotech companies going public, we see less diagnostic and specialty pharma and more early stage drug R&D companies. Four companies this year were in Phase I or Pre-clinical and nine at Phase II, for a total of 13 with lead assets before proof-of-concept in man. That is an indicator that, finally, public investors are willing to take on the development risk that has been avoided for the last five years.

Another interesting fact about the recent IPOs: all biotech IPOs since the signing of the JOBS Act in 2012 have used the new pathway. Both company management and investors are now experiencing the benefits of the less-strict pre-IPO environment.

Want to hear from the CEOs and investors making the headlines? Join us at the 12th Annual BIO Investor Forum (October 8-9th, 2013 in San Francisco) where we will feature two panels on the public markets: an investor perspective and an in depth discussion with company management making the private to public transition. The BIO Investor Forum is the must attend event for companies setting their sights on IPO. In fact, 71% of the 2013 companies that have gone public have attended past Business Investor Forums.

A few tables are provided below showing the top five IPOs by amount raised, price performance and market cap. 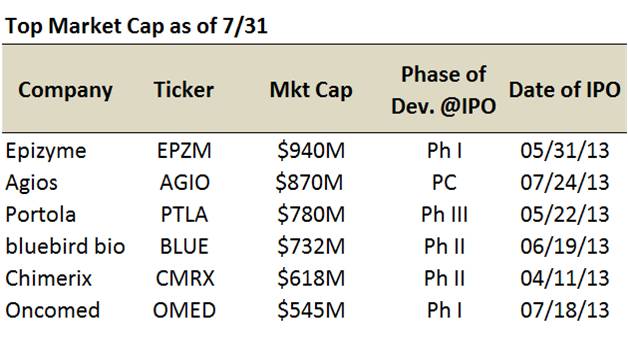