“Being Charlie,” a film that educates audiences about the realities of opioid addiction and sheds light on the stigma associated with the disease, framed and at times illustrated a keynote discussion this morning, as BIO president and CEO Jim Greenwood spoke to the film’s director, Rob Reiner.

The legendary Reiner directed the film based on a screenplay co-written by his son Nick Reiner, based on the latter’s struggle with addiction. In between clips of the film, Greenwood and Reiner discussed the film’s personal nature, Nick’s and his parents’ struggles, and the medical and societal forces that can be an impediment to recovery.

Reiner said that they first realized their son Nick was having problems with drugs when he was 14 years old. “If you’re a parent of a child who experiences this … you really don’t know what to do,” he said. “All I kept thinking was ‘I don’t want my kid to die.’”

For more than half a decade Nick was in and out of rehabilitation, a process reflected in “Being Charlie” and one that both Reiners approach with earned cynicism. “To send him away at age 15 was traumatic,” Reiner said.

Medicine alone cannot address all the challenges of opioid addiction, said Richard Pops, CEO of the biotech company Alkermes, when introducing Reiner. “We know that to have the most significant impact we have to be part of a broader solution” that includes science and medicine but also the patient’s point of view, and the patient’s family’s point of view. Reiner provided that point of view candidly.

Reiner’s accomplishments extend far beyond the screen. He has been an instrumental social activist, advancing the causes of marriage equality in the United States, various environmental causes, and as an advocate for early childhood development “to give children the right kind of foundation” early in life “so they can be on the right path. He successfully campaigned for a California initiative that raised taxes on cigarettes and directed the proceeds - upwards of $750 million per year - toward children’s health care, preschool, disease screenings and home visitation programs. Reiner was appointed as the chair of the state commission overseeing implementation of the initiative - a perch that gave him insights into how government operates.

But a short-lived ambition to run for governor of California was thwarted, Reiner said, when he discussed the idea with his wife and three kids. “I polled at 40%” within the family, he joked. “If I can’t win my own family, I thought, maybe I should rethink this.”

Greenwood and Reiner also discussed the director’s latest film, “Shock and Awe” debuting this month, about difficulty of the truth breaking through a cloud of misinformation - in this case around the run up to the Iraq War, but a phenomenon with clear parallels today. The director also revealed which of his films means the most to him (“Stand by Me”), why he enjoys acting for other directors (“if the movie stinks, it’s not my fault”), and how he transformed his worry about playing the same iconic character for eight years in the groundbreaking sitcom “All in the Family” into a multifaceted learning experience that gained him insights into writing, directing, and acting from his colleagues.

“I wanted to be a director, and I was worried [the show] would go on forever,” he said. “But I just studied everything,” spending time in the writers room and with the director, learning how to structure stories. “It’s the foundation of everything I’ve done.” 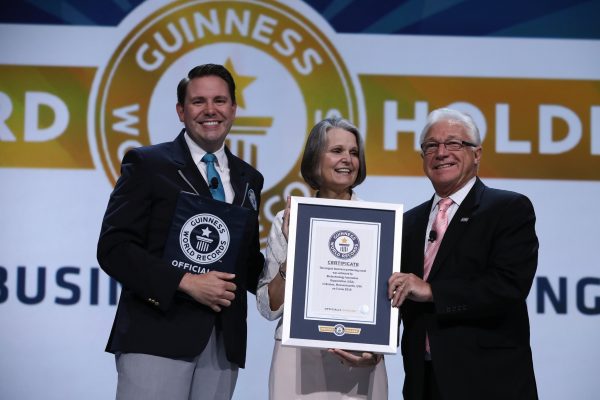 The Wednesday keynote also confirmed what biopharma companies armies of business development executives jammed into partnering cubicles already knew. There really are more One-on-One Partnering meetings at BIO than anywhere else. And BIO now holds the official Guinness World Record to prove it.  With more than 45,000 meetings scheduled this week, “you are all officially amazing,” observed Michael Empric, official adjudicator for Guinness World Records North America.