September 17, 2014
A number of media outlets are reporting today on a letter to President Obama urging approval for the genetically engineered AquAdvantage® Salmon and for more support for the innovative solutions that animal biotechnology can provide. 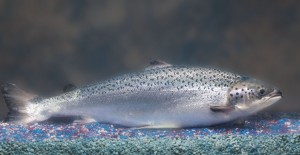 Ninety scientists and biotechnology executives signed the letter asking the President to alleviate the political gridlock that has entangled the fish for years. The AquAdvantage® Salmon, genetically engineered to reach market size in half the time of a conventional Atlantic salmon, has been the subject of review at the U.S. Food and Drug Administration (FDA) for 19 years.

“The obvious regulatory roadblocks AquaBounty is experiencing not only undermine our ability to meet the future food needs of the world, but seriously damage the global credibility of FDA and its objective, science-based approval process, while stifling innovation in this critical field,” says the letter.

In September 2010, the FDA’s Center for Veterinary Medicine’s (CVM) Veterinary Medicine Advisory Committee (VMAC) met in Washington, DC, to review the AquaBounty Technologies Inc. application and concluded with positive findings. Two years later, in December 2012, FDA released a “finding of no significant impact” (FONSI), the last step required before the agency may issue its final decision. “After an extension of the original EA comment period, the agency has spent an unprecedented 16 months reviewing public comment,” the scientists explain.

Aside from the concerns addressed over the GE salmon’s regulatory approval timeframe, the scientists warn that the fish’s dilemma is an example of policies that are “directly impacting global and domestic food security; the ability of scientists to respond to the impacts of human and animal disease, climate change, and the spirit of invention, innovation and scientific breakthrough, all hallmarks of American ingenuity.”

“Your Administration has made global food security a high priority, as Secretary of State John Kerry affirmed during the first-ever African Leaders Summit in Washington, D.C,” the letter says.  “Crop biotechnology and emerging animal biotechnology are critical tools in global efforts to achieve a sustainable global food production system.  We firmly believe it is time FDA action give credence to your Administration’s public support of biotechnology.”
More on This Topic