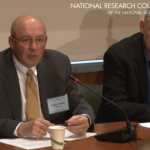 The NRC’s GE Crops Committee will generate a report sometime in early 2016 highlighting the history of genetic engineering, examining the science and ramifications of biotech crops and assessing the potential that GE crops hold for the future.

NRC reports can carry significant weight in Washington as they usually offer direction for both Congress and regulatory agencies to examine holes or changes needed to address scientific concerns over a given topic.

Describing GE crops impact on production agriculture, Robb Fraley, Monsanto's executive vice president and chief technology officer said, “Innovation on the farm has been the key and it will continue to be.”

A pioneer in the science of agricultural biotechnology, Dr. Fraley was one of three recipients of the 2013 World Food Prize.  But Fraley said while science is contributing to new innovations within agriculture, that progress can be hindered because poor quality science can impact public perception.


“It’s not the science.  It’s really the communication of the science that’s the problem,” said Fraley.  “Traditional information sources, such as scientific authorities and quality peer-reviewed research publications, are no longer as relevant for helping the public to accept and value new technologies. Instead, numerous, readily available, social media outlets routinely distribute misleading and unreliable information based on poor quality science and bias. There is growing science illiteracy within the general public and a lack of understating of what constitutes reliable science.”

“The role of the National Research Council in underscoring the benefits of GE crops, the worldwide scientific consensus around the safety of the science and its potential applications moving forward has never been more important.”

The Committee held its initial public meeting on September 15-16, 2014.  Videos from the webcast of the public sessions from the first committee meeting are posted on the study’s website; The December 10 webcast should be posted soon.
More on This Topic