Shifting CAR-Ts Into a Higher Gear

June 8, 2016
After a three-year run-up of mounting excitement over CAR-T therapies comes crunch time. Over the next 12 to 18 months the first couple of leading CAR-T projects could be filed for US approval, and one of them might even secure regulatory go-ahead – if its manufacturer’s expectations are realistic.

Some analysts are forecasting blockbuster sales and seeing CAR-T becoming standard therapy in certain relapsed cancers, based on early data that – in certain patients – show long-term activity. These aggressive expectations lie behind two standalone CAR-T companies, Juno and Kite Pharma, boasting billion-dollar market caps, and the bullishness has not abated even as the biotech market turned sour.

Indeed, anyone thinking that the bursting of the bubble might make CAR-T developers take the foot off the gas should look at the 2015 year-end reports from Juno and Kite. Having ended 2015 with $1.2bn and $615m respectively in the bank, the groups this year plan to burn through half a billion dollars between them.

Thus the stage is set for what could be the first commercial US launches of anti-CD19 CAR-T products. After the years of raising cash, securing licensing rights from academia and starting numerous small studies the race is on to generate hard clinical data. Moreover, the sector has not been sitting on its hands as regards outstanding problems, and this report brings up to date the numerous ways in which these are being tackled.

However, it is undeniable that we are in uncharted territory, and it will not be easy for such aggressive development plans to come to fruition; sector bulls cannot ignore the many obstacles that remain.

These include the complexity and expense of manufacturing, the poor durability of many current CAR constructs, the growing ways by which tumour cells can become resistant to therapy, and the ever-present though now somewhat diminished fear of severe toxicities. The expense of CAR-T – estimates are that the cost will be around $500,000 per procedure – looks hard to sustain given that in most cases these treatments have been used as a mere bridge to stem cell transplant.

Commercially, the CD19-focused haematological cancer field has become extremely crowded, necessitating a push into solid tumours – an extremely tough nut to crack owing to their immunosuppressive microenvironment. But detailed strategies are being drawn up to manage toxicities, and defined-composition products could enable lower doses to be given to improve safety; some groups are working to cut manufacturing costs drastically; ingenious strategies are being developed to overcome relapses, and there is the distant promise of mRNA electroporation and allogeneic CARs.

A huge amount of work has also gone into improving the current generation of CAR constructs, including

This should result in continued corporate finance opportunities as funds are needed to move new projects through pipelines, and collaborative and even M&A activity, as groups work to bring in ever-more revolutionary technologies. Investors still need to proceed cautiously, and it is possible that the coming year will see a major setback, but a sharp revaluation of the space could provide further opportunities.

The vast majority of CAR-T projects at present in clinical studies incorporate a so-called second-generation design, following on from the first-generation constructs of the 1990s. These early constructs, sometimes called “T bodies”, had an antigen-binding region derived from an antibody, a transmembrane anchor and a single intracellular stimulatory domain; they were not particularly efficacious.

Second-generation CARs add a second stimulatory region, called a co-stimulatory domain, and this has proved to offer a significant improvement in terms of T cell persistence and ultimately efficacy. The most commonly used costimulatory domains are CD28 and 4-1BB (CD137), but also include ICOS, Ox40 and other possibilities.

Third-generation constructs incorporate more than one co-stimulatory region, while the fourth generation might be more complex still, though this last type of construct has yet to enter the clinic. 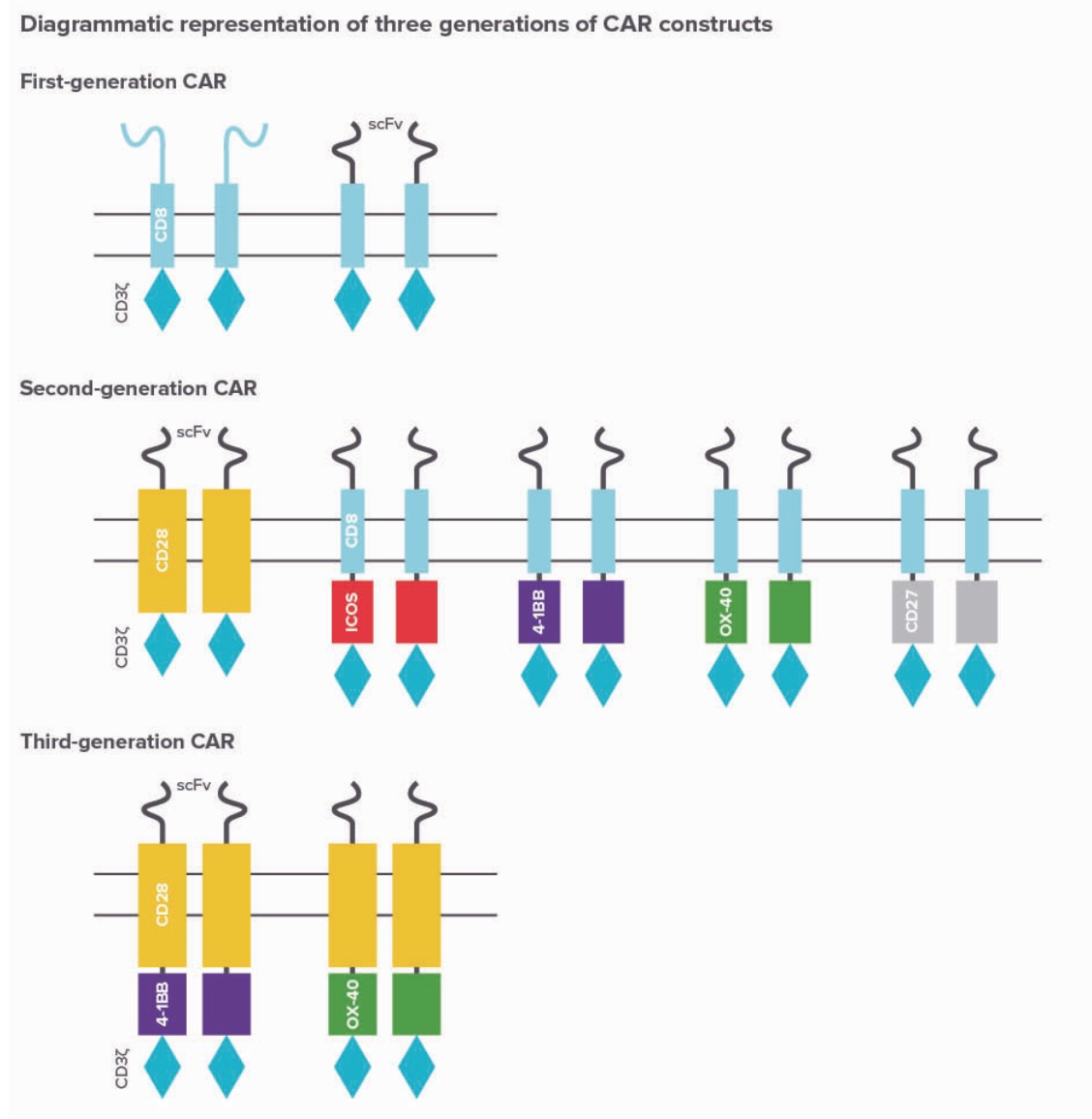 The complimentary report can be downloaded at www.evaluategroup.com/CART2016. A hard-copy Executive Summary of the report is available at Evaluate’s booth #7501 at the 2016 BIO International Convention.