A Snack and a Science Lesson in One

November 13, 2015
Last week freelance science journalist and frequent contributor to Nature Biotechnology Emily Waltz was able to try a bite of the non-browning apple. Along with her children, the group put the genetically modified apples through "a battery of tests to see how child-friendly and tasty they really are."

She blogged about her experience in the NY Times:


The apples also gave us an opportunity to talk about what genetic engineering is and where we stand on the issue — a topic parents will increasingly face. In the American home, the idea of engineered, or genetically modified (GM), foods so far has remained a bit abstract. We don’t know when we are eating such ingredients, since they aren’t labeled on food packaging. And we don’t see or experience the traits, since most genetic modifications to crops aim to improve yield or create efficiencies for the farmer.

Apples engineered to thwart the browning process, however, put the science in our faces.

Our children will be able to hold these apples in their hands and watch the engineered trait work. A non-browning apple is a concrete demonstration of biotechnology at work.

The apple’s developer, a small Canadian company called Okanagan Specialty Fruits, accomplished this by silencing genes that code for polyphenol oxidase, the enzyme that causes browning in apples when they are bumped or sliced and exposed to air.

Regulatory agencies in the United States and Canada earlier this year approved the apple, and Okanagan says it plans to make them available in small test-market quantities in the fall of 2016.

Neal Carter, the founder of Okanagan, says he will initially market the fruit, called Arctic apples, to food service companies and others that offer packaged, presliced apples. Unlike conventional apples, sliced Arctic apples won’t require the addition of browning inhibitors such as calcium ascorbate to keep them visually appealing to consumers. That ingredient omission should improve the taste as well. Okanagan plans to make whole apples available to consumers later, Mr. Carter said.

"Of all the challenges we face as a family, unsightly apples don’t make the top 100. Still, I was keen to give it a try. My children inhale fresh apples, but when I put them in a lunch box or backpack it’s another story. Browned from slicing or bruising, by lunch time, apples that have traveled to school don’t look appetizing and inevitably return home uneaten. I’ve tried lemon juice, but my children don’t love it."

Our Arctic Goldens were picked from Okanagan’s research fields in Washington, and arrived individually bubble-wrapped, inside a cooler, inside a box. Considering the dollars that have gone into the development of GM apples and the small numbers produced so far, I figure these are the most expensive apples we will ever eat.

"We sliced them, ran them through the blender, and gave them the ultimate backpack test. With each experiment we compared them in taste and visual appeal with conventional Golden Delicious apples bought at the grocery store. The result: Arctic apples withstood everything we threw at them, while the grocery store apples looked, well, brown."

The difference was most obvious when we made smoothies. The conventional apples turned brown almost immediately in the blender, but the Arctic apples stayed a bright yellowish-green. Then came the backpack test. I put both an Arctic and a conventional variety into a satchel and let my older son swing it around on the porch, banging into everything (much like he does on the way to school). Then we sliced up both apples. Both were beat up, but the conventional had brown bruises at each point of contact, while the Arctic variety didn’t change color.

In the midst of the science experiments, Mr. Carter, from Okanagan, emailed me saying apple cores (GM or not) can contain fungi with their own browning enzymes, and to avoid 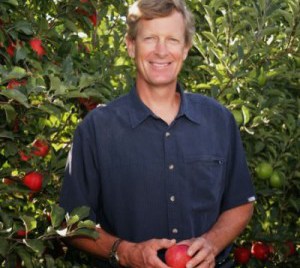 them when cutting if we wanted a completely white apple.

Of course that became our next test. We found in our small sampling there was a bit of browning right at the core of the Arctics when we sliced through it, but it didn’t affect the rest of the apple.

So the technology works. It isn’t the kind of biotech trait that will change lives, and until it’s available in stores, it’s hard to say if consumers will pay a premium over the price of a conventional apple. It is a milestone, in that it is one of the few biotech foods to be brought through the regulatory system by a small company — a business other than Monsanto or Dupont Pioneer, for example.

"It also marks a shift. The non-browning apple is one of a small handful of biotech traits on its way to market that is aimed at the consumer, rather than the farmer."

J.R. Simplot Company has created a non-browning potato using a similar technology that received regulatory approval about year ago, and Scotts Miracle-Gro has in development a handful of turf grasses that have been engineered to require less mowing than their conventional counterparts. Researchers are also working on nutritionally enhancing foods such as bananas and rice for people in developing nations.

Given the apple’s niche as a wholesome, family-friendly food, the Arctic variety’s introduction to the market probably won’t happen quietly. At least three growers associations have already voiced concerns, saying GM apples could create market disruptions for conventional apples. The consumer group Center for Food Safety argued that the United States Department of Agriculture’s environmental assessment of the apple was inadequate — a complaint the center has made for nearly every biotech crop the Department of Agriculture has approved in recent years. Other groups have argued that the genetically modified apple underscores the need for mandatory labeling of genetically modified food.

Parents I know tend to have a vague notion that there are arguments for and against genetically modified organisms (often called GMOs), but aren’t clear on the bottom line: whether the technology is safe. Misinformation and vitriol spewed by both opponents and defenders of the technology have created an impenetrable mess online that parents don’t have time to navigate. Much of the fear about genetically modified foods has stemmed from these unknowns.

"I have been writing about genetic engineering for the journal Nature Biotechnology for 10 years, and after hundreds of interviews with scientists, I can say that I’m completely comfortable with the technology. (Obviously, or I wouldn’t be feeding my children genetically modified apples)."

I do think that as biotechnology evolves in ways that enable new traits, and as we find new ways to tweak a plant’s genes, our regulatory and safety assessments must adapt. Indeed, the White House in July ordered federal agencies to modernize their regulatory framework for genetically modified organisms.

As with anything (movies, iPhones, sleepovers) parents are going to have to determine their comfort level with biotech food. If these genetically modified apples start replacing the sliced apples our children have been served in the past, parents will see a biotech trait right before their eyes. Perhaps that is the nudge parents need to make the conscious decision whether to let their children take a bite.