September 18, 2014
This week, BIO presented South Dakota Governor Dennis Daugaard the first ever food and agriculture Legislator of the Year Award at the 2014 Livestock Biotech Summit. 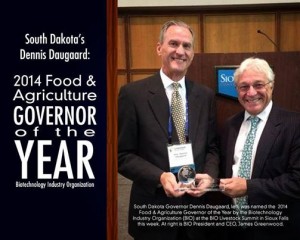 When presenting the award, BIO President and CEO Jim Greenwood commented that "Governor Daugaard is a true champion of the biotechnology industry and has made investing in and promoting South Dakota's bioeconomy a hallmark of his time in office. Washington, can learn a thing or two from Governor Daugaard's Leadership. During his time in office, he has focused on ensuring that South Dakota has a competitive tax system, reducing red tape, and has worked to make strategic investments in research and development. If you have ever had a chance to see the Governor in actions at our BIO International Convention, you understand how effective he is at selling the benefits of starting and building your business in South Dakota."

Governor Daugaard spoke of his support for the animal biotechnology industry especially as it as truly help grow the bioeconomy within his state. In 2013, CNBC ranked South Dakota as the #1 state for business and the Governor stressed how important he believes it is to keep it that way. Additionally, Fast Company Magazine has named South Dakota the #1 state for entrepreneurial growth, which is very much evident in Daugaard's legislative record of supporting both small and large animal research facilities.
Visit here to read the BIO's release on the award.