February 18, 2016
Discussions about a potential legislative solution to the GMO food labeling debate have prompted farmers to weigh in, especially sugar beet farmers who are concerned that some food companies are switching from beet sugar to cane sugar to avoid disclosing GMOs on their food labels.

Philip Brasher writes for Agri-Pulse that leaders of the Senate Agriculture Committee are working on a possible compromise bill that could head off state GMO labeling requirements, the first of which is set to take effect in Vermont this summer.

Committee Chairman Pat Roberts, R-Kan., has said he was prepared to introduce a bill on his own to jump-start Senate action on the bill. But in a statement to Agri-Pulse on Tuesday he said he is working with the committee's ranking Democrat, Debbie Stabenow, “toward a timely, comprehensive solution to the patchwork of state laws. It is my plan for our committee to act on a solution soon.”

Roberts and Stabenow have been divided chiefly over whether the bill would require food companies to disclose the presence of biotech ingredients.

Stabenow told Agri-Pulse last week that she was working with a “number” of other senators, whom she didn't name, who were interested in passing a bill. “I think we're going to have to come up with a compromise,” she says.

If she and Roberts can reach a deal, it may be in part due to the potential impact of labeling laws on sugar beet growers, many of whom are in Stabenow's home state of Michigan.

Almost all of the sugar beets grown in the United States are genetically engineered for herbicide tolerance, but there is no biotech sugarcane, which means that companies that want to avoid a GMO label will have to switch from beet to cane sugar or another sweetener.

There already have been signs of trouble for sugar beets, well ahead of the July effective date for a GMO labeling law in Vermont. Hershey Co. announced last year that it was switching from beet to cane sugar because the latter is non-GMO, and a major cane sugar marketer, Domino Sugar Inc., is now marketing its products as non-biotech.

Bags of C&H sugar, a Domino brand, carry a seal that says, “100% Pure Cane - Contains NO BEET sugar.” Domino-branded sugar is labeled with the seal of the Non-GMO Project.

Roberts specifically cites the threat to the beet sugar market as a key reason Congress needs to act quickly to head off state labeling laws.

“If you have a label and the people who put the label on insist that sugar beet growers are out,” then food companies “now have to rely on cane sugar, which means a brand new sugar program if we're not careful,” Roberts quips. “It's silly. It's not only silly it's very dangerous. We don't need to be going down that rocky road.”

But the challenges facing sugar beet growers also could be a source of key Democratic votes for preemption legislation. Five of the six senators representing the top beet-producing states - Minnesota, North Dakota and Michigan - are Democrats.

None of the other four Democrats has taken a stand on the issue, but the senior Democrat on the House Agriculture Committee, Collin Peterson of Minnesota, tells Agri-Pulse he believes his state's two Democratic senators, Amy Klobuchar and Al Franken, will both vote for the preemption bill. North Dakota's Heidi Heitkamp, who faces re-election in 2018 in her heavily Republican state, “will probably be with us” as well, says Peterson.

“None of them want to be out front,” Peterson says of the Democratic senators. “That's the problem.”

Luther Markwart, executive vice president of the American Sugarbeet Growers Association, says his members are “paying a great deal of attention” to the labeling debate, but he said their concerns go beyond sugar. He declined to discuss the group's lobbying effort.

“My guys grow biotech corn and soy and alfalfa and sugar beets and all kinds of stuff,” he said. “Clearly, from an entire agriculture standpoint this is something that is very important to them. It's not just sugar specifically, it's everything.”

The issue is particularly frustrating for beet producers since there is no GMO material in the refined product. Tests can't tell the difference between beet or cane sugar, he says. “When someone says it's biotech sugar, the fact is, it is not,” he says. “The beet is biotech.” 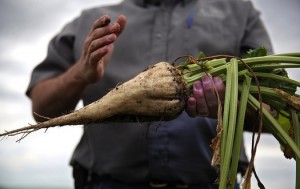 This is echoed by sugar beet farmer Kyle Petersen in the Minneapolis Star Tribune.  Peterson, chairman of the board of the Southern Minnesota Beet Sugar Cooperative, is hopeful that consumers review all of the information available so they fully understand how biotechnology is helping both people and the environment.

“Sugar beet growers, processors and our food-company customers understood that there is no difference between beet sugar and cane sugar before we began using our current sugar beet seeds,” writes Peterson.  “They understood that using a GM seed was the sure way to continue providing the highest quality and safest products for our customers at reasonable prices.”