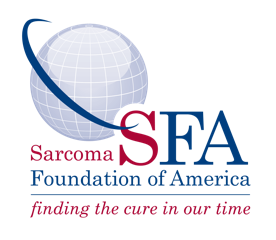 The pages on the calendar have quickly turned and July is again upon us.  For most, July means freedom from school, a summer vacation, or celebrating our nation’s independence.  But those of us in the sarcoma community know that this month means something else as well.  As we know, July is Sarcoma Awareness Month.

Why do we have a Sarcoma Awareness Month?  Simply, sarcoma is still considered to be the “forgotten cancer.”  Our efforts to encourage more research and more drug development are made difficult due to a lack of awareness and understanding.  Think about the major efforts that take place during other months for other diseases.  People have come to recognize the meaning of other colored ribbons, yet don’t know the significance of our yellow ribbon.  How as a community do we raise funds for vital research if people don’t know that this cancer exists? 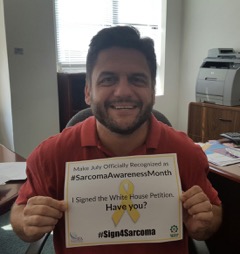 Though our community has chosen this month to focus on raising awareness for sarcoma, there has never been an official designation by any governmental entity.  The Sarcoma Foundation of America, along with the Sarcoma Alliance, wants to see this oversight rectified.  We have created a petition on WhiteHouse.gov asking the Obama Administration to issue a proclamation and officially recognize July as Sarcoma Awareness Month.  In order for the White House to respond to this petition, 100,000 people need to sign on by July 29, 2016.

We know that having a White House proclamation won’t magically produce new treatments or fund new research efforts, which are obviously the ultimate goal. But it does raise the profile of sarcoma with the Administration.  With Vice President Biden’s efforts to spur innovation through the Cancer Moonshot initiative, it is imperative that the Administration hears from the sarcoma community about our needs.  This petition – and a response from the White House – can go a long way to foster a groundswell of awareness with the public as well.

We know that reaching 100,000 signatures in one month seems like a daunting task.  But we also know the power of this community and the desire to see sarcoma recognized by the public.  The fact is that roughly 50,000 people are battling sarcoma at any one time. Imagine how easily we could we could hit the 100,000 goal if we only had two signatures for every one person with sarcoma. Think of it this way: how many signatures could we get if every patient, caregiver, family member, physician, co-worker, and friend signed this petition? This is where we need your help.

Here is what you can do:

Together, with our voices loudly united, we can help raise the profile of sarcoma.  Let’s use the power and passion of our community to bring desperately needed attention to this disease – attention that will help us further our cause for increased research and new treatments.

July is our time.  So while others may be focused on barbecues and beach trips, the sarcoma community will be focused on spreading the message behind the yellow ribbon.  Won’t you please help us with this effort?
More on This Topic