“Time to Call out the Anti-GMO Conspiracy Theory” 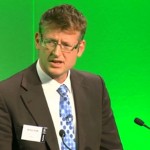 In a speech last week at Cornell University on anti-GMO conspiracy theory, Mark Lynas told audiences “millions, possibly billions, of people have come to believe what is essentially a conspiracy theory, generating fear and misunderstanding about a whole class of technologies on an unprecedentedly global scale.”

Formerly a devout anti-GMO activist himself, Lynas said his activism, “which I wrongly thought of at the time as being ‘environmental’, has done real damage in the world… I am now convinced that many people have died unnecessarily because of mistakes that we in the environmental movement collectively made in promoting anti-GMO fear. With that on your conscience, saying sorry and then moving on is not enough. Some restitution is in order.”

Lynas admitted that after his January speech at the Oxford Farming Conference that he has been “subject to a coordinated campaign of intimidation and hate, mostly via the internet.”

Still, Lynas says, “I believe the time has now come for everyone with a commitment to the primacy of the scientific method and evidence-based policy-making to decisively reject the anti-GMO conspiracy theory and to work together to begin to undo the damage that it has caused over the last decade and a half.”

The Lynas speech is posted in its entirety, along with hundreds of online comments, on his website at www.marklynas.org.
More on This Topic